Some have interpreted this verse to say that the Jews are cursed because they spoke this and crucified Jesus. While these certain Jews fully accepted responsibility for crucifying Jesus, that does not mean that all Jews are now cursed.

God does not punish children for their parents’ sins, as seen in this verse. Each person stands before God, responsible only for his own acts.  While the results of wrong decisions and wrong actions have their natural effect on later generations (Ex. 20:5), it does not determine their eternal destiny. A distinction should be made between the natural results of a sinful course of action, and punishment inflicted because of it. God does not penalize one individual for the wrong deeds of another (Eze. 18:2–24), but at the same time God does not interfere with the laws of heredity as well as cause and effect (Gen. 1:21, 24, 25; Matthew 7:20).

While the Jews who crucified Christ did a terrible action which had negative results, that does not mean all Jews are plagued with a curse. The apostle Paul was himself a Jew and even persecuted the Christian church until he was converted (Philippians 3:5-6). He not only was a missionary and evangelist, he also wrote much of the New Testament. Although he had some negative things in his past, that does not mean he was cursed. Paul actually says it is an advantage to be a Jew, as they were given the oracles of God (Romans 3:1-2). He makes the distinction, however, that a true Jew is one in the heart, and not merely outwardly (Romans 2:28-29).

While all Jews are not cursed, the nation of Israel has suffered because of the decisions of its leadership. In the deadly siege of Jerusalem by the Romans in a.d. 70, a generation after the crucifixion (Matt. 24:15–20), the Jews suffered the inevitable result of their fateful decision the day they withdrew from the covenant of God by their declaration, “We have no king but Caeasar” (John 19:15). Those who heeded the warning of Christ were spared, while those who did not, suffered terribly.

So, did God cancel His covenant with the nation of Israel? No, in the New Testament, the name Israel applies to all those that accept Jesus Christ. In other words, all true Christians are now God’s spiritual Israel. “There is neither Jew nor Greek, there is neither slave nor free, there is neither male nor female; for you are all one in Christ Jesus” (Galatians 3:28). Paul also writes, “Know ye therefore that they which are of faith, the same are the children of Abraham” (Galatians 3:7). Thus, according to Paul, a real Jew in the sight of God is anybody—Jew or Gentile—who has personal faith in Jesus Christ! 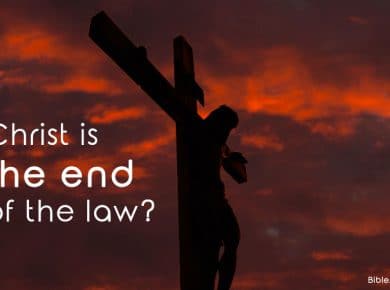 Table of Contents Christ is the end of the lawRomans 10:4Christ didn’t abolish the lawThe good news of the gospel This answer is also available in: العربية हिन्दीChrist is the…
View Answer

This answer is also available in: العربية हिन्दी“And do not fear those who kill the body but cannot kill the soul. But rather fear Him who is able to destroy…
View Answer