The Bible in Acts 19:1-5 shows the need to get baptized twice, in certain occasions:

“And it came to pass, that, while Apollos was at Corinth, Paul having passed through the upper coasts came to Ephesus: and finding certain disciples, he said unto them, have ye received the Holy Ghost since ye believed?

And they said unto him, we have not so much as heard whether there be any Holy Ghost.

And he said unto them, unto what then were ye baptized?

And they said, Unto John’s baptism.

Then said Paul, John verily baptized with the baptism of repentance, saying unto the people, that they should believe on him which should come after him, that is, on Christ Jesus.

When they heard this, they were baptized in the name of the Lord Jesus.”

The above passage is referring to Paul who was preaching in Ephesus. There, he found 12 men who had been baptized by John the Baptist. These Ephesian disciples knew nothing of the baptism of the Spirit and the gifts of the Spirit, and little of the doctrines of faith in Christ. This was an experience shared by all those whose baptism is recorded in the book of Acts.

So, upon receiving this new light, they were rebaptized. The Spirit came in this instance as a provision for the great work that was to change Ephesus from a city wholly devoted to the goddess Artemis (Diana) into a place sufficiently won to Christ to become a center of Christian life throughout this area, and that for several centuries to come.

When one has been baptized into Christ, rebaptism is called for only if there has been a definite apostasy from the beliefs and standards that fellowship with Christ requires. Also, rebaptism can apply to a person who was not baptized in the biblical method which is by immersion (Matthew 3:15; Mark 1:9; John 3:23). 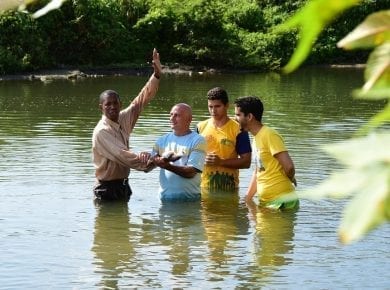 This answer is also available in: العربية Français हिन्दीBeing baptized is an essential part of salvation. Jesus defined the terms for entrance into His Kingdom: “Except a man be born…
View Answer

This answer is also available in: العربية Français हिन्दीOne of the first principles of understanding the Bible is that doctrine should be based on many passages and not just a…
View Answer