The “Left Behind” series taught the secret rapture of the believers. Can you give me the Bible support for this teaching?

Answer
According to Left Behind series, the return of Jesus Christ actually takes place in two phases. First, Jesus returns silently and secretly to take away the believers. This begins the “seven-year period called the Tribulation.” During the Tribulation, the Antichrist rises to enforce the mark of the beast. Then, at the end of the Tribulation, the Lord comes back visibly, which is called Christ’s “glorious appearing.” So, according to Left Behind, the rapture comes first, and then, seven years later, is the second coming of Jesus Christ at the end of the world.

There are three basic concepts that stand out in this teaching:

Now let’s test these three concepts with what the Bible teaches:

1-This point teaches that the rapture and the second coming do not occur simultaneously. But, Paul clearly states that the rapture and the second coming take place at the same time “For the Lord himself shall descend from heaven with a shout, with the voice of the archangel, and with the trump of God: and the dead in Christ shall rise first: Then we which are alive and remain shall be caught up together with them in the clouds, to meet the Lord in the air: and so shall we ever be with the Lord” (1 Thessalonians 4:16,17).

Also, this verse clearly shows that it will not be a silent and invisible coming of the Lord, as taught in Left Behind. But rather, the believers will be caught up at with a shout and with the trump of God. Jeremiah, also, says that the Lord will come with a roar, shout and noise:

“The Lord shall roar from on high, and utter his voice from his holy habitation; he shall mightily roar upon his habitation; he shall give a shout, as they that tread the grapes, against all the inhabitants of the earth. A noise shall come even to the ends of the earth; for the Lord hath a controversy with the nations, he will plead with all flesh; he will give them that are wicked to the sword, saith the Lord. Thus saith the Lord of hosts, Behold, evil shall go forth from nation to nation, and a great whirlwind shall be raised up from the coasts of the earth. And the slain of the Lord shall be at that day from one end of the earth even unto the other end of the earth: they shall not be lamented, neither gathered, nor buried; they shall be dung upon the ground” (Jeremiah 25:30-33).

Paul said this tremendous “day of the Lord” will finally arrive like “a thief in the night” (1 Thessalonians 5:2). Many interpret this to mean that Jesus will come like a silent thief to steal believers out of this world. Then the saints will disappear silently from all over the world. Yet is this really what Paul is saying?

Paul wrote: “For yourselves know perfectly that the day of the Lord so cometh as a thief in the night. For when they shall say, Peace and safety; then sudden destruction cometh upon them, as travail upon a woman with child; and they shall not escape” (1 Thessalonians 5:2-3). Paul is simply saying that Jesus’ coming as a “thief in the night” does not mean He will come quietly and invisibly to steal believers out of this world, as is taught in Left Behind. Rather, it means He will come unexpectedly, bringing “sudden destruction” upon the unsaved. It is not secret, only sudden.

2- The Left Behind theory teaches that those who miss the rapture will have during the Tribulation a “second chance” for salvation. This idea is very dangerous because it leads people to rationalize that there is no need to give our hearts to the Lord today since we can still join the Tribulation force during the seven years. But the truth is that no one knows when his end will come and we need to be ready to meet God at any time “behold, now is the accepted time; behold, now is the day of salvation” (2 Corinthians 6:2).

What About the Seven Years?

The Bible text that serves as the foundation for the entire seven-year Tribulation theory is Daniel 9:27, which is the very first verse quoted in Left Behind: The Movie. It says: “He shall confirm the covenant with many for one week; and in the midst of the week he shall cause the sacrifice … to cease.”

In prophecy, a day represents a year (Numbers 14:34; Ezekiel 4:6), thus the period of “one week” actually represents seven years. Millions are now applying this to a future seven-year period of Tribulation. They believe that “He” referrers to the Antichrist, who will make a covenant with the Jews during the Tribulation.

But there is a more logical interpretation that has far more biblical support. And it has been taught by many credible Bible scholars who have written respected commentaries. One example is the world-famous Matthew Henry’s Bible commentary. Matthew Henry applies the prophecy to Jesus Christ, who, after three and a half years of loving ministry, died “in the midst of the week,” which ultimately caused all animal sacrifices to cease “By offering himself a sacrifice once and for all he [Jesus] shall put an end to all Levitical sacrifices.” Matthew Henry’s Commentary on the Whole Bible, Vol. IV-Isaiah to Malachi, Complete Edition. New York: Fleming H. Revell Co. 1712, notes on Daniel 9:27, p. 1095.

Another excellent Bible commentary written by Adam Clarke says that during the “term of seven years” (Daniel 9:27), Jesus Christ would “confirm or ratify the new covenant with mankind.” The Holy Bible with a commentary and critical notes by Adam Clarke, Vol. IV-Isaiah to Malachi. New York: Abingdon-Cokesbury Press, notes on Daniel 9:27, p. 602.

Here’s one more quote from the respected Jamieson, Fausset and Brown commentary: “He shall confirm the covenant-Christ. The confirmation of the covenant is assigned to Him.” Rev. Robert Jamieson, Rev. A. R. Fausset, and Rev. David Brown, A Commentary Critical and Explanatory on the Whole Bible, Complete Edition. Hartford, Conn.: S.S. Scranton Co., notes on Daniel 9:27, p. 641.

The Bible itself shows that Christ will confirm the covenant “He shall confirm the covenant with many for one week” (Daniel 9:27). Notice that Jesus Christ Himself said, “This is My blood of the new covenant, which is shed for many” (Matthew 26:28, NKJV). Our Lord Jesus Christ is the One through whom “the covenant … was confirmed” (Galatians 3:17; Romans 15:8, NKJV). In the midst of the week, after three and a half years, Jesus gave His life for us, “causing the sacrifice to cease.” He was the final Sacrifice. No more sacrifices are to be offered (Hebrews 10:12).

3- The Left Behind theory teaches that believers will not have to face the Antichrist and the mark of the beast. People are deeply afraid of the tribulation, and find the theory of the secret rapture very comforting. But believers should not be occupied by fear ”There is no fear in love; but perfect love casteth out fear: because fear hath torment. He that feareth is not made perfect in love” (1 John 4:18).

Jesus taught that the believers will go through the tribulation “Then they will deliver you up to tribulation and kill you, and you will be hated by all nations for My name’s sake. … But he who endures to the end shall be saved” (Matthew 24:9, 13, NKJV). And that He will save His church-not from tribulation, but rather through it. For He has promised “Lo, I am with you alway, even unto the end of the world” (Matthew 28:20).

This page is also available in: हिन्दी (Hindi)For all that are afraid of going through the end time tribulation, the Bible shares an assuring incident, “He was in the hinder…
View Answer 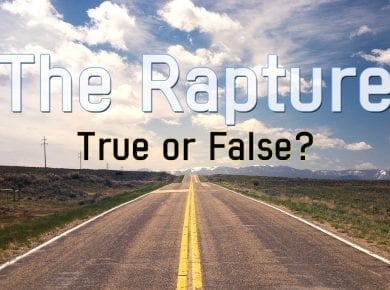 This page is also available in: हिन्दी (Hindi)The secret rapture theory is based on a few texts which have been taken out of context. There are two main concepts in…
View Answer