Pope highlights Mary’s role as ‘woman of the apocalypse’
By Benjamin Mann
CatholicNewsAgency.com

“What is the meaning of this image? It represents the Church and Our Lady at the same time,” the Pope told the crowd assembled before the nearby statue commemorating the 1854 definition of Mary’s Immaculate Conception. “Before all, the ‘woman’ of the apocalypse is Mary herself.”

The 12th chapter of the Biblical Apocalypse – also known as the Book of Revelation – describes the glorification and persecution of “a woman clothed with the sun, with the moon under her feet, and on her head a crown of twelve stars.”

Though not named, this woman is described as the mother of the Messiah. In poetic language akin to the Bible’s other prophetic books, Saint John says she faced the threat of “a huge red dragon, with seven heads and ten horns,” and “fled into the desert where she had a place prepared by God.”

Pope Benedict, offering white roses in his traditional yearly act of Marian veneration, gave listeners his insight into the connection between the Virgin Mary and the Church – portrayed in the Apocalypse through the single image of the sun-clad woman.

“She appears ‘clothed in sunlight,’ that is, clothed in God,” observed the Pope. “The Virgin Mary is in fact completely surrounded by the light of God and lives in God …  The ‘Immaculate One’ reflects with all of her person the light of the ‘sun’ which is God.”

“Besides representing Our Lady, this sign personifies the Church, the Christian community of all times,” he continued.

The Church, he explained, is “pregnant, in the sense that she carries Christ” and “must give birth to him to the world.”

“This is the labor of the pilgrim Church on earth, that in the midst of the consolations of God and the persecutions of the world, she must bring Christ to men.”

Because the Church continues to bring Jesus into the world, Pope Benedict said, it “finds opposition in a ferocious adversary,” symbolized in scripture by the “dragon” that has “tried in vain to devour Jesus,” and now “directs his attacks against the woman – the Church – in the desert of the world.”

“But in every age the Church is supported by the light and the strength of God,” the Pope said. “She is nurtured in the desert with the bread of his word and the Holy Eucharist.”

“And in this way, in every tribulation, through all of the trials that she finds in the course of the ages and in the different parts of the world, the Church suffers persecution, but comes out the victor.”

Pope Benedict said the Church should not fear persecution, which is bound to arise, but will be defeated.

“The only pitfall of which the Church can and must be afraid is the sin of her members,” he warned, highlighting the key difference between the Church and the woman who is its prototype.

“While in fact Mary is immaculate – free from every stain of sin – the Church is holy, but at the same time marked by our sins.”

While sinless herself, Mary remains in solidarity with the Church struggling against sin.

“That is why the people of God, pilgrims in time, turn to their heavenly mother and ask for her help,” explained Pope Benedict.

He stressed the world’s need for the hope brought by the “woman clothed with the sun” – “especially in this difficult moment for Italy, for Europe and for different parts of the world.”

“May Mary help us to see that there is a light beyond the veil of fog that appears to envelop reality,” he declared.

“For this also we, especially on this day, never cease to ask with filial trust for her help: ‘O Mary, conceived without sin, pray for us who have recourse to you.’” 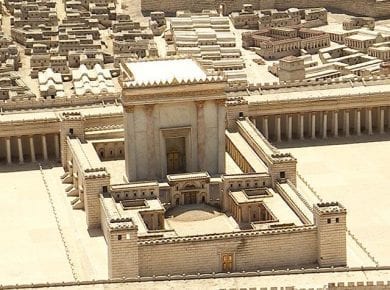 Contemporary Christian “Zionists” have written on the rebuilding of the Jewish temple in Israel that would usher the second coming of Christ. These include Thomas Ice, Randall Price, Grant Jeffrey,…
View Answer