Let’s look in the Bible for references to the number thirteen to understand what it stands for:

-Nimrod, who founded the tower of Babel (Genesis 6) in defiance to God, was the thirteenth in Ham’s line of descendants. Here the number thirteen is connected with the rebellion of men against the Creator.

-The destruction of Jericho is also connected with the number 13, for the city was marched around for six straight days, and on the seventh day it was marched seven times adding up to the number thirteen.

-The phrase ‘valley of Hinnom’ (or variation thereof) occurs in thirteen places in Scripture. This phrase is the modern name for the valley Gehenna, from the Hebrew Gehinnom, which is a small valley in Jerusalem.  In the Jewish and Christian literature Gehinnom is an analogue of hell or Lake of Fire as described by Jesus in Matthew 5:22 & 18:9. The valley was a place of Satanic services for the god Moloch (or Molech). There, pagan parents would offer their children as sacrifices to be burned alive on the red-hot arms of the idol.

-The dragon, a symbol for Satan, is found 13 times in Revelation. Satan is the originator of sin and rebellion against God.

So, the number thirteen is used in connection with rebellion, evil, and death. 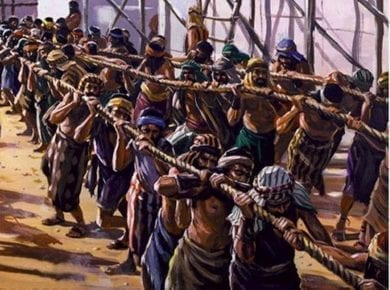 This answer is also available in: हिन्दीHere is what the Bible has to say about slavery: God created all men equal (Proverbs 2:22; Ephesians 6:9; Galatians 3:28; Acts 17:26; Romans…
View Answer

This answer is also available in: हिन्दीThe Bible was written by about forty writers over a period of 1600 years. It was written by authors whose education and background varied…
View Answer