Bible prophecy teachers around the world are putting a lot of emphasis on the modern nation of Israel and the rebuilding of the Jewish Temple. And millions of America’s politically active Christians believe God Himself is not only behind modern Israel, but that He will finally destroy the enemies of the Jewish State at Armageddon.

But what does the Bible say about the modern state of Israel?

According to the New Testament, there are now two Israels. One is composed of literal Israelites “according to the flesh” (Romans 9:3, 4). The other is “spiritual Israel,” composed of Jews and Gentiles who believe in Jesus Christ. Paul clearly teaches that, “not all Israel, which are of Israel” (Romans 9:6). That is, not all are part of God’s spiritual Israel who are of the literal nation of Israel. And he adds: “They which are the children of the flesh [physical descendants of Abraham], these are not the children of God: but the children of the promise are counted for the seed” (v. 8).

Thus, the children of the flesh are only the natural descendants of Abraham, but the children of the promise are the ones counted as the true seed. And the reason for that is: any person—Jew or Gentile—can become part of this spiritual nation of Israel through faith in Jesus Christ.

It is true that God chose Israel in the OT to be His chosen people t0 share His truth with the whole world. But when Israel as a corporate nation rejected Christ and planned to kill Him, “Jesus answered and said unto them, destroy this temple, and in three days I will raise it up. Then said the Jews, Forty and six years was this temple in building, and wilt thou rear it up in three days? But he spake of the temple of his body” (John 2:19-21).

Jesus was not speaking of rebuilding the physical temple of Israel. He meant to build a spiritual temple for all people. And He mournfully added,  “Jerusalem, Jerusalem, you who kill the prophets and stone those sent to you, how often I have longed to gather your children together, as a hen gathers her chicks under her wings, and you were not willing. Look, your house is left to you desolate” (Matthew 23:37,38).

Because of the Jews’ disobedience and rejection, Jesus predicted the destruction of the physical temple and Jerusalem. “Verily I say unto you, there shall not be left here one stone upon another, that shall not be thrown down” (Matthew 24:1, 2).  Jesus’ prophecy of the destruction of the temple and Jerusalem came to pass in 70 AD by the Romans. And then God’s promises and covenant to literal Israel were transformed to spiritual Israel or the church.

Bible prophecy teachers that tie end time prophecies to modern Israel, use this verse “And so all Israel shall be saved” (Romans 11:26) to mean that God will ultimately save all literal Jews. But God is not a racist. In the New Testament the saved believers are only those “who serve God by his Spirit, who boast in Christ Jesus, and who put no confidence in the flesh” (Philippians 3:3). Thus, anyone whether Jew or Gentile that accepts Christ, will be certainly saved.

To illustrate this, Paul uses the analogy of an olive tree to explain that all Gentiles who are saved are grafted into the stock of Israel. “If some of the branches have been broken off, and you, though a wild olive shoot, have been grafted in among the others and now share in the nourishing sap from the olive root, do not consider yourself to be superior to those other branches. If you do, consider this: You do not support the root, but the root supports you” (Romans 11:17, 18). And he also writes, “Know ye therefore that they which are of faith, the same are the children of Abraham” (Galatians 3:7).

This is the good news of the gospel that: “there is neither Jew nor Greek, … for ye are all one in Christ Jesus. And if ye be Christ’s, then are ye Abraham’s seed, and heirs according to the promise” (Galatians 3:28, 29). In Christ’s kingdom all are covered with the same garment of Christ’s righteousness, which they receive by faith in Jesus Christ.

God’s kingdom is a spiritual one. Thus, the focus of end time prophecies in the Bible (Mount Zion, Israel, Jerusalem, the temple, the Euphrates, Babylon and Armageddon) should not be on a literal state but on a spiritual one. 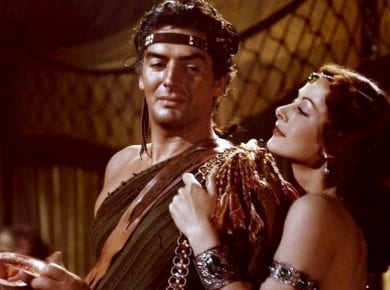 Samson was the strongest man that ever lived. But His weakness was beautiful women. Samson fell in love with a beautiful Philistine woman named Delilah. Now, Delilah had been promised…
View Answer