Some have claimed that Paul’s description of Christ as the firstborn of creation means that Jesus was created — not eternal, not God. Such a doctrine, however, conflicts with the rest of the Bible. John 1 clearly names Him Creator. Christ could not be both Creator and created as seen in Colossians 1:

“And He is the image of the invisible God, the firstborn (Gr. Prōtotokos) of all creation. For by Him all things were created, both in the heavens and on earth, visible and invisible, whether thrones or dominions or rulers or authorities — all things have been created by Him and for Him. And He is before all things, and in Him all things hold together. He is also head of the body, the church; and He is the beginning, the firstborn from the dead; so that He Himself might come to have first place in everything. For it was the Father’s good pleasure for all the fullness to dwell in Him, and through Him to reconcile all things to Himself, having made peace through the blood of His cross; through Him, I say, whether things on earth or things in heaven” (Colossians 1:15-21).

It seems more correct, therefore, to regard “prōtotokos” or firstborn as a figurative expression describing Jesus Christ as first in rank, the figure being drawn from the dignity and office held by the firstborn in a human family, or, more precisely, the firstborn in a royal family. Christ’s position is unique, authoritative, and absolute. He has been entrusted with all prerogatives and authority in heaven and earth. Paul emphasizes the position of Christ because he is seeking to meet the arguments of the false teachers, who declared that Christ was created, and who denied His supremacy. 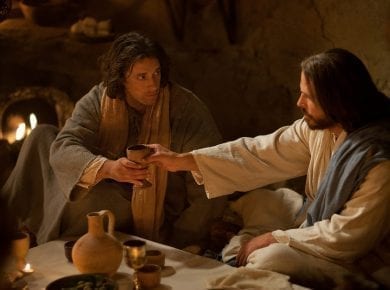 This page is also available in: हिन्दी (Hindi)Jesus promised His disciples, “I tell you, I will not drink from this fruit of the vine from now on until that day…
View Answer

This page is also available in: हिन्दी (Hindi)Paul wrote that the incarnation of Christ is a great mystery (1 Tim. 3:16). To go beyond the limits of what Inspiration has…
View Answer