Jesus did not have a beginning; He is the Beginning “He was in the beginning with God” (John 1:1-2). Paul says, “He is before all things, and in Him all things consist” (Colossians 1:17). Jesus’ existence did not begin with His conception in Mary’s womb. He was alive in eternity (Micah 5:2). But Mary came into existence after the creation of Earth. She, like all human beings, was not eternal. She was not divine, and not “from everlasting to everlasting” (Micah 5:2). She could not have provided an eternal nature to her Son. Jesus alone is Deity. He is the “eternally blessed God” (Romans 9:5).

In fact, Mary considered herself as a “maidservant of the Lord” (Luke 1:38). When speaking about the blessing of being chosen by God to be the mother of the Messiah, Mary declared: “For He [God] has regarded the lowly state of His maidservant” (Luke 1:48). The words “lowly state” would be inappropriate to refer to Mary if she is the “Mother of God.”

Jesus made it clear that Mary had no special preeminence before God. While Jesus was teaching the multitudes, “a certain woman from the crowd raised her voice and said to Him, ‘Blessed is the womb that bore You, and the breasts which nursed You!’” (Luke 11:27). Jesus responded, “More than that, blessed are those who hear the word of God and keep it” (11:28).

And when Mary asked for Jesus’ help at the wedding in Cana, He said, “Woman, what does your concern have to do with Me?” (John 2:4). He used the word “woman” not in a derogatory way but as an expression of respect (Matthew 15:28; John 19:26; 20:15). He just wanted Mary to realize that His mission was directed by His Father alone.

In another occasion when Mary and His brothers came to see Him, “He stretched out His hand toward His disciples and said, ‘Here are My mother and My brothers!’” (Matthew 12:49). Jesus showed that anyone who believed in Him and obeyed the will of God would be blessed as part of His family.

Catholics worship Mary, claiming that she has “divine maternity” (“Dogmatic Constitution on the Church” 1964, 8.3, Second Vatican Council). But if Mary is to be worshiped as the “Mother of God,” we should expect to have a biblical basis for that. However, such a command is not found in the Bible. There is not a single verse in the Bible that describes Mary as the “Mother of God.” This idea is based on human tradition.

How can Mary, a created being become the mother of the Creator Himself? 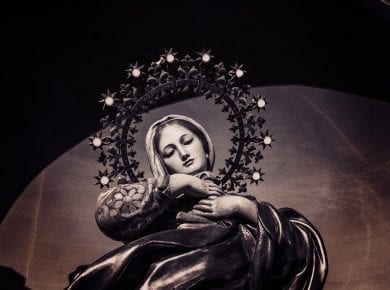 This answer is also available in: हिन्दीThere is no biblical support for the Assumption of Mary. The Bible, however, does mention God “assuming” both Enoch and Elijah into Heaven (Genesis…
View Answer

This answer is also available in: हिन्दीThe Bible states that Jesus had brothers and sisters: “While He was still talking to the multitudes, behold, His mother and brothers stood outside,…
View Answer