The passage, in Luke 11:51, is probably a reference to the last recorded murder in the Old Testament and most suitable case for Jesus’ illustration. The story of Zechariah at the time of king Joash is recorded in 2 Chronicles 24:20-22:

“Then the Spirit of God came upon Zechariah the son of Jehoiada the priest, who stood above the people, and said to them, “Thus says God: ‘Why do you transgress the commandments of the LORD, so that you cannot prosper? Because you have forsaken the LORD, He also has forsaken you.’ ” So they conspired against him, and at the command of the king they stoned him with stones in the court of the house of the LORD. Thus Joash the king did not remember the kindness which Jehoiada his father had done to him, but killed his son; and as he died, he said, “The LORD look on it, and repay!”

After the death of Jehoiada the high priest, the leaders of Judah came to king Joash. And the king listened to them. But these leaders had left the house of the LORD God of their fathers, and worshiped heathen idols and thus lost God’s national protection putting all of Judah and Jerusalem in danger of enemy invasion. But the Lord in His mercy, sent prophets to warn them and to bring them back to Him; but they didn’t not listen to them (v. 17-19).

Finally, the Lord sent Zechariah the son of the high priest to give the king and his people another rebuke saying, “Why transgress when transgression will bring ruin (Eze. 18:31)? Instead of heeding his warning, the king stoned Zechariah. Jehoiada (Zechariah’s father) had saved the life of the infant king and raised him to the throne when he was seven years old (v. 1), and now the king had no appreciation for the kindness that had been given to him that he commanded the death of the son of his protector.

God does not force His presence and blessing upon anyone. When men refuse His love, the Lord withdraws His Spirit from them, and then they are left to the mercies of the cruel evil god of this world that they worship (Mark 3:28,29).. 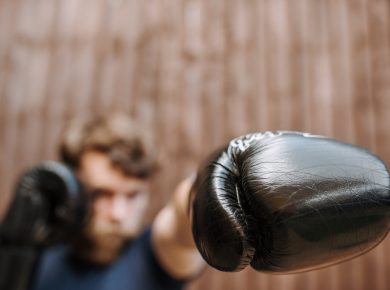 The metaphor of boxing In his first letter to the Corinthian Church, the apostle Paul gave a metaphor about boxing where he resembled the Christian life with that of an…
View Answer