“Then the fifth angel sounded: And I saw a star fallen from heaven to the earth. To him was given the key to the bottomless pit. And he opened the bottomless pit, and smoke arose out of the pit like the smoke of a great furnace. So the sun and the air were darkened because of the smoke of the pit. Then out of the smoke locusts came upon the earth. And to them was given power, as the scorpions of the earth have power … The shape of the locusts was like horses prepared for battle. On their heads were crowns of something like gold, and their faces were like the faces of men. They had hair like women’s hair, and their teeth were like lions’ teeth. And they had breastplates like breastplates of iron, and the sound of their wings was like the sound of chariots with many horses running into battle” (Revelation 9:1-3, 7-9).

The “locusts” and “scorpions” have been applied by many Protestant commentators (Calvin, Barnes, Wesley, Spurgeon, Elliot, etc.) to the armies of Mohammed in their wars of conquest. Mohammad was a fierce desert warrior who spread Islam with the sword.

Here’s a brief commentary on Revelation 9:

Verse 1: Many commentators have applied the phrase “a star fallen” to Satan and Islamic leaders whose cruelty served his purposes.

Verse 2: “The bottomless pit” points to desolate region of Arabia. The “smoke” that darkened “the sun and the air” has been applied to Mohammed’s doctrines that obscure “the sun” (the true light of Jesus Christ, Revelation 1:16) and “the air” (the fresh air of freedom, 2 Corinthians 3:17).

Verse 3: The “locusts” and “scorpions” refer to the armies of Mohammed in their wars of conquest.

Verses 4, 5: A “command” and “authority” was mysteriously “given” to these ferocious armies only against those without “the seal of God in their foreheads.” In other words, authority was given to them as a scourge against apostate Christianity similar to the authority granted to King Nebuchadnezzar against ancient Israel when she wickedly departed from the ways of God (read Jeremiah 25:8-11).

Verse 5: During the fifth trumpet, Islamic warriors were given authority for “five months.” Most Protestant commentators during the (1500s-1800s) applied the day-for-a-year principle to this prophecy (Numbers 14:34 and Ezekiel 4:6), making this 150 literal years (30 days in a Hebrew month x 5) of aggressive Islamic warfare against Constantinople, the capital city of the eastern Roman Empire. During that period (1299-1449 AD), the eastern Roman Empire was tormented, but not “kill[ed].”

Verses 7-9: The symbolism exactly fits the dress of Turkish Muslim warriors. They wore “gold” (gold colored, yellow turbans), had “hair like women’s hair” and were extremely cruel (like “lions teeth”), literally wore “breastplates of iron,” and rode “horses” as they rushed “into battle.”

This answer is also available in: हिन्दीThe apostle John wrote: “Now the great city was divided into three parts, and the cities of the nations fell. And great Babylon was…
View Answer 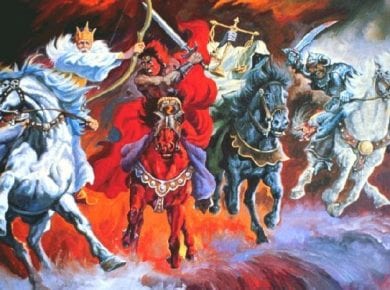 This answer is also available in: हिन्दीThe four horsemen of the Apocalypse that are described in Revelation chapter 6, verses 1-8 are symbolic descriptions of successive phases in the history…
View Answer