Jude was one of the apostles of Christ. He is also the author of the book that bears his name. He  identifies himself as “Jude, the servant of Jesus Christ, and brother of James” (v. 1). The writer of this book may well have been the brother of James, and thus a brother of the Lord Jesus.

The author intended to write a regular epistle to affirm the believers in their Christian faith, but news of the creeping deceptions in the church ( v. 4,8) led him, under the direction of the Holy Spirit, to change his first plan and instead to admonish the believers to boldly defend their faith against falsehood. He exposed the deceivers and urged the churches to focus their attention on the purity of the gospel of Jesus Christ. Hints in Colossians, the pastoral epistles, and Revelation show that Gnostic heresies had started to surface in the churches of Asia Minor. For this reason Jude’s letter was addressed to these churches.

Jude quotes from the Book of Enoch, and he cites Enoch’s prophecy that the Lord would come with many thousands of his saints to render judgment on the whole world. He paraphrases (verse 9) where Satan and Michael the Archangel contend over the body of Moses. He also writes about the Lord’s judgments on the wicked when he punished the evil angels that fell, destroyed the unbelieving Israelites, and eradicated the inhabitants of Sodom and Gomorrah.

The book of Jude is one of the shortest books in the Bible, being only 25 verses long. The epistle’s style is fervent. The book was composed as an encyclical letter addressed to all churches. In the NT, “Jude” is mentioned five times: three times as Jude the Apostle (Luke 6:16, Acts 1:13, John 14:22), and twice as Jude the brother of Jesus (Matthew 13:55, Mark 6:3). 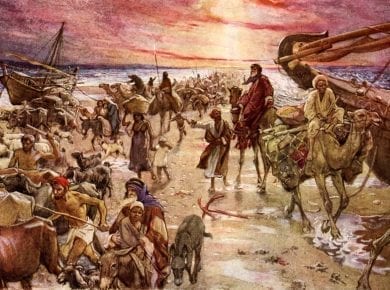 This answer is also available in: हिन्दीWhen Israel left Egypt, a large multitude, comprising mainly of Egyptians, joined them. The Scripture names them as the “mixed multitude,” which means literally,…
View Answer