In the heart of the Earth

The phrase “in the earth” appears 66 times in the King James Bible, but none of these refers to the grave. In Matthew 12:40, the word “heart” comes from the Greek word kardia, which is where we get the word “cardiac.” According to Strong’s, “kardia” means the heart (i.e., thoughts or feelings [mind]). It also can mean the middle. Additionally, the Greek word for “earth” is “ge.” It literally means soil, a region, or the solid part or whole of the terrene globe.

So, the phrase “in the heart of the earth” can be interpreted as “in the midst of the world”—or in the grip of this lost Earth. In other words, in Matthew 12:40, Jesus is telling His disciples that just as Jonah was in the belly of a great fish, so He would be in the central grip of the world.

But when were the sins of the world placed upon the Lamb of God? It was before He died on the cross. According to Hebrew tradition, the sins were confessed upon the Passover lamb before it was slain as an atonement.  So it was during the Last Supper (Thursday night), that Jesus sealed His new covenant. He sealed it with the bread and grape juice, to be the Lamb who takes away the sins of the world. Soon after the instituting covenant at the Last Supper, Jesus began carrying our guilt. And thus, after the Last Supper, Jesus started to carry the wrath of God for our sin.

On that Thursday evening, Jesus prayed in agony, sweating drops of blood. He said, “Not my will, but thine, be done” (Luke 22:42-44). From that moment on, Christ had sealed His surrender. He fulfilled His destiny as the guilt-bearer for the fallen race. He was in “the heart of the earth,” or more clearly: “the depths of the world.” And just as with Jonah, there appeared to be a total and hopeless darkness that surrounded the world’s Redeemer.

There are five Bible verses in which Jesus refers to Thursday evening as “the hour,” meaning an important transition period in His ministry. These are: Matthew 26:45; Mark 14:41; Luke 22:14; John 16:32; John 17:1. Jesus was “in the heart of the earth,” or in the clutch of the enemy, over a period of three days and three nights—Thursday night, Friday night, Saturday night.

According to Jewish timing, any small part of a day was reckoned as the entire twenty-four-hour period. The Jewish Encyclopedia states: “A short time in the morning of the seventh day is counted as the seventh day; circumcision takes place on the eighth day, even though, of the first day only a few minutes after the birth of the child, these being counted as one day.” Vol. 4, p. 475.

The Bible gives us examples to this inclusive method of timing such as in Joseph’s dealing with his brethren. “He put them all together into ward three days. And Joseph said unto them the third day, This do, and live;… go ye….” (Genesis 42:17-19). Also, note the tax issue between King Rehoboam and the people. “Come again unto me after three days. … So … all the people came to Rehoboam on the third day” (2 Chronicles 10:5, 12). And about circumcision, Genesis 17:12 specifies “he that is eight days old.” But Luke 1:59 reads “on the eighth day.”

Therefore, we can conclude that if an event touched on any part of three days, it was considered a three-day event—ending on the third day. Thus, Jesus was where He said He would be, in heart of the earth, for three days and nights. This began Thursday night. Then, He was bearing our sin in the garden of Gethsemane, followed by His death, burial and resurrection on the third day.

This answer is also available in: العربية हिन्दीThe use of the term “Son of God” to refer both to Adam and to Jesus should not be assumed to actually mean…
View Answer 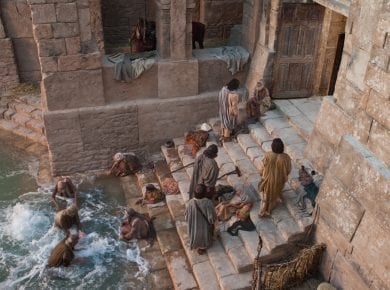 This answer is also available in: العربية हिन्दी“Now there is at Jerusalem by the sheep market a pool, which is called in the Hebrew tongue Bethesda, having five porches” (John…
View Answer