The account of Jephthah’s daughter in the Bible is very overwhelming. Jephthah, in judges 11, vowed to God that if he were victorious in battle, he would sacrifice to God whoever came through the doors of his house upon his return from battle. The record of Jephthah’s rash vow confronts us with one of those difficult passages of Scripture. According to one explanation Jephthah actually offered his daughter as a burnt offering, and by so doing placed himself in an evil light. The second, view, which assumes that Jephthah devoted his daughter to a life of celibacy, frees him from the charge of offering her as a sacrifice.

Evidence shows that the second view is the correct one because human sacrifices are strictly forbidden by Mosaic law (Leviticus 18:21; 20:2-5; Deuteronomy 12:31; 18:10). It would be strange for Jephthah to think that he could elicit God’s favor in battle by promising to offer Him a human sacrifice which is in direct violation of the Mosaic law.

Jephthah’s action may best be understood by recognizing that he was using “olah” in a figurative sense. We use the term “sacrifice” in a similar fashion when we say, “I’ll sacrifice money for charity.” Jephthah was offering to sacrifice a member of his extended household to permanent, religious service associated with the Tabernacle. The Bible indicates that such non-priestly service was available, particularly to women who chose to so dedicate themselves (e.g., Exodus 38:8). Anna must have been one woman who had dedicated herself to the Lord’s service, since she “did not depart from the temple” (Luke 2:37). Several indicators in the story of Jephthah support this conclusion:

First, the two-month period of mourning that Jephthah granted to his daughter was not for the purpose of grieving over her impending loss of life, but over the fact that she would never be able to marry. She bewailed her virginity (bethulim)—not her death (11:37).

Second, the scriptures say that Jephthah had no other children: “She was his only child. Besides her he had neither son nor daughter” (11:34). For his daughter to be consigned to perpetual celibacy meant the extinction of Jephthah’s family line—an extremely serious and tragic matter to an Israelite (Numbers 27:1-11; 36).

Third, the sacrifice is treated as unfortunate—again, not because of any concern over her death, but because she would not become a mother. After stating that Jephthah “did with her according to his vow which he had vowed,” the inspired writer immediately adds, “and knew no man” (11:39). This statement would be a completely superfluous if she had been put to death.

The Spirit of God came upon Jephthah in order that Israel might be saved from destruction. But the presence of the Spirit does not guarantee infallibility. The one who receives the Spirit remains a free moral agent and is expected to make appropriate progress in spiritual growth and knowledge. 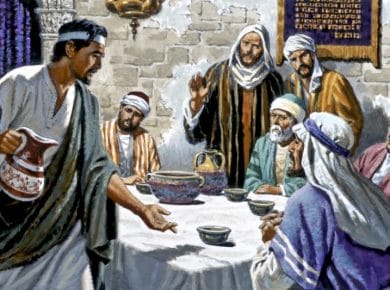 This page is also available in: العربية (Arabic) हिन्दी (Hindi)The Rechabites were mentioned in the book of Jeremiah chapter 35. The prophet’s experience with them took place in an earlier…
View Answer

This page is also available in: العربية (Arabic) हिन्दी (Hindi)Pope Francis gave a radio address from the Vatican on Wednesday morning August 12.  He expressed how he feels about Sunday…
View Answer