Have you heard the phrase, “It’s not a salvation issue!”?

This is a linchpin justification for, usually, a concerning theological promotion.

If one accepts this premise, any further Biblical discussion becomes a waste of time as any conclusions are thrown into a waste bin of intellectual and spiritual irrelevancy.  Each position on an issue is of no consequence because, “It’s not a salvation issue.”  But what if it is a salvation issue?

The Ten Commandments have principles behind them that are seen when separate passages in the scriptures comment on them.

A rather well-known example of this is the case of Commandment Six in reference to murder.  This Commandment has been a source of significant division based on the way it has been interpreted.  If we take the reading to not kill as applying to all killing versus killing out of hatred or murder, there are significant ramifications.

The first interpretation taken to its logical conclusion would place the capital punishments of the Old Testament in contradiction with the Law of God.  However, when the second interpretation is used, everything is in harmony.  We know we can take the Sixth Commandment to refer to ‘murder’ rather than ‘kill’ based on how Jesus referred to it in Matthew 5:21-22:

In so doing He has clarified the nature of what is meant in this Commandment.  Killing with the heart of hatred makes a significant difference.  The disciple John understood this and it is reflected in his inspired writings:

Whoever hates his brother is a murderer, and you know that no murderer has eternal life abiding in him (1 John 3:15).

Based on the testimony of Jesus and John, a violation of the Sixth Commandment may occur without someone actually dying or even having been physically harmed.  You can also violate the Sixth Commandment with your words.  Have you not witnessed individuals who verbally abuse others?  This is what Christ is getting at in reference to degrading insults like ‘Raca’ and ‘fool,’ that can bring these individuals before the judgment.  Even James refers to the tongue, or our words, as having deadly poison (James 3:8).

The expansions of breaking God’s Law are also seen quite clearly in Commandment Seven.

You have heard that it was said to those of old, ‘You shall not commit adultery.’  But I say to you that whoever looks at a woman to lust for her has already committed adultery with her in his heart (Matthew 5:27-28).

Just as demonstrated with Commandment Six, a violation of Commandment seven can be identified without a physical act.  The motives of the heart are very important.  The eye of lust is sufficient for Heaven to mark this Commandment as broken.  But it doesn’t stop there.

Take a close look at 1 Timothy 1.  In this passage Paul loosely re-words the later six Commandments in their presented sequence by identifying violators of these Commandments.  In so doing he allows us to further understand their meaning and how they can be applied.

Note what is included in violations pertaining to adultery:  fornicators and sodomites.  What this means is that the Seventh Commandment isn’t just about breaking a monogamous relationship or having intimate relations outside of wedlock.  There is more to it than that.

Intimate relationships, either in action or in the heart, that depart from the will of God, from God’s order in creation, are all adultery.  When you read in the books of Moses condemnations of incest, bestiality, homosexuality and fornication, these are an expansion of the Seventh Commandment and are therefore all sin.

Now, let us also take a look at Commandment Ten, you shall not covet.  Why is this Commandment needed?  Isn’t the Commandment to not steal enough?  Not necessarily.  For one, someone may steal without actually having a desire for object heisted away.  The motive may not be coveting.  Certainly the Eighth and Tenth Commandments may converge in some instances with both having been broken in one act of theft.  But there is something very important in the mindset of the Tenth Commandment requiring special, separate treatment.

While the Commandment pertaining to coveting can apply to material things, it also applies to immaterial things, such as status and position.  The damage sometimes done when breaking Commandment Ten is not always measured by something physical as with stolen goods.  Yet, we can attest to the fact that the efforts to satisfy a covetous heart are horrible in their consequences.

There are multiple examples of this in the Bible.  To examine a case in point, consider the nature of the showdown of Korah versus Moses and Aaron in the wilderness.

When they envied Moses in the camp, and Aaron the saint of the Lord, the earth opened up and swallowed Dathan, and covered the faction of Abiram (Psalm 106:16-17).

It can be seen in Psalm 106 that the real spirit behind Korah’s posturing was envy and covetousness, thus breaking Commandment Ten.

Another example would be the case of King Uzziah.  Although he was generally known as a good king and godly leader, the priesthood had not been given him.  But he determined to participate in the priesthood anyway and was struck with leprosy (2 Chronicles 26:18-21).  Which Commandment did he break by seeking to be a priest?  Commandment Ten.

When Eve partook of the forbidden fruit, a significant element of what she was doing in that act was voting to be as God, a position not given her (Genesis 3:5).  No created being can be God.  Someone may ask, “What Commandment did Eve break by eating the fruit?”  Commandment Ten was a big part of her decision.

Most horrible of all, Lucifer, in his continued rebellion against God, has been seeking a position not given him.  What is the real spirit behind that ambition but a coveting to be like the Most High.

For you have said in your heart: ‘I will ascend into heaven, I will exalt my throne above the stars of God; I will also sit on the mount of the congregation on the farthest sides of the north; I will ascend above the heights of the clouds, I will be like the Most High’ (Isaiah 14:13-14).

How is it that Lucifer, and rebels in general, gather followers about them (Revelation 12:3-4)?  It is by their ideologies.  It is very curious that in 1 Timothy 1 the wording where the Tenth Commandment should be is “any other thing that is contrary to sound doctrine.”  Why does Paul identify the Tenth Commandment with doctrine?  I believe this strikes at the thought process behind the formulation of false teachings.  Korah had the flattering teaching that “all the congregation is holy” (Numbers 16:3) and used it to falsely qualify anyone, especially himself, as priest.  He thus rallied those around him for the purpose of seizing the priesthood.  It was no small number that bought into his unsound doctrine, and they all received God’s judgment.

There are those in the church of God who, though given high honors and positions, are not satisfied.  Desiring the highest positions, they seek sympathizers to support their cause.  They denigrate and defame the leaders of the church in the process of trying to remove them and take their position.  To achieve this, they must stand out and apart from the doctrines of the church, calling for changes in theology.  New and unsound doctrines such as the ordination of women to pastoral ministry (1 Timothy 2-3) and the acceptance of an active homosexual lifestyle as not sinful are prominent.  Members of the church are inspired and supported to take positions and lifestyles that are not theirs to have.

Lucifer’s actions brought about war in Heaven (Revelation 12:7-9).  Eve’s choice was the first step in the fall of humanity, bringing sin into this world.  A large company joined in the rebellion of Korah to take the priesthood that was not theirs to have.  In each of these instances, which prominent Commandment was broken?  Commandment Ten.  Now, is that a salvation issue or not?

When Moses heard of the rebellion of Korah, he fell on his face (Numbers 16:4).  It is my sincere desire that those engaged in foment in the church will turn from their course, that they will come before the Lord in repentance.  God will accept with open arms those who turn from the path of sin, whatever its expression.   In every age, in different ways, a decision is placed before each individual.  Where will we stand?  By the grace of God, may it be with the truth in Christ. 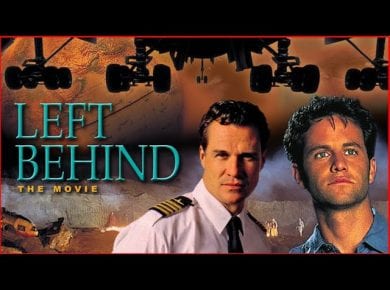 Kirk Cameron, best known for his role on Growing Pains, acted as the lead role in the Left Behind movie series released in 2000. The Left Behind series, that were…
View Answer
The Secret is the #8 best-selling book on Amazon. I wonder do the principles in this book really work? The book claims to parallel several world religions. So, despite all its…
View Answer