The divine nature and the human nature of Jesus Christ, were blended into one person. Divinity was clothed with humanity, not exchanged for it. The two natures became closely and inseparably one, yet each remained distinct (John 1:1–3, 14; Mark 16:6; Heb. 2:14–17). Although, as a man, He could have sinned but He did not. He was “tempted like as we are, yet without sin” (Heb. 4:15).

The Son equal to the Father

Paul confirms that the vital characteristics and qualities of God were possessed by Jesus Christ, who existed as One with God. “Who, being in the form of God, did not consider it robbery to be equal with God” (Phil. 2:6). This seats Christ on an equality with the Father, and sets Him far above all other authorities. “For in Him dwells all the fullness of the Godhead bodily” (Colossians 2:9). Thus, in Christ dwells the sum total of the nature and qualities of God.

Yet, Christ abandoned it all in the interests of man’s salvation. He stripped Himself of His heavenly privileges and survived in the province of men, even to the possession of a human body. Jesus Christ became one of us to reveal the Father’s love, to suffer for our sins, and redeem us from sin (Heb. 2:14–17). The eternal Word, who had ever been with the Father (John 1:1) became Immanuel, “God with us” (Matt. 1:23).

“But made Himself of no reputation, taking the form of a bondservant, and coming in the likeness of men. And being found in appearance as a man, He humbled Himself and became obedient to the point of death, even the death of the cross” (Philippians 2:7,8).

The mystery of incarnation

The incarnation of God the Son is a mystery that people can’t fully comprehend. Paul wrote, “Without controversy great is the mystery of godliness: God was manifested in the flesh” (1 Timothy 3:16). The victory of God’s love over the powers of evil in a man’s life will continually be the cause for awe and gratitude and the foundation for every hope through out the endless ages. 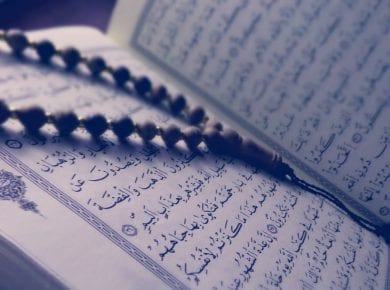 Let’s allow the Quran to answer this question: Quran (2:191-193) – “And kill them wherever you find them, and turn them out from where they have turned you out. And…
View Answer

Here are verses from the Qur’an that exhort the believers to fight: Quran (2:191-193) – “And kill them wherever you find them, and turn them out from where they have…
View Answer