There is both geological and Biblical support for the concept of Pangea – an original supercontinent. It seems that this land mass quickly split apart during the global Flood at the time of Noah by the process of catastrophic plate tectonics (CPT). This movement of the plates also shaped the ocean basins and mountains that we have today.

The secular scientists have taught that the continents were once connected together in a supercontinent that split apart. Then, the resulting continents drifted over millions of years into their present positions. They claim that the main proof for this is the jigsaw-puzzle fit of Europe and Africa corresponding closely with North and South America. If the North and South Atlantic Ocean basins are locked, these continents fit together at roughly the Mid-Atlantic Ridge, a range of mountains on the ocean floor centrally positioned in the Atlantic Ocean basins. It was this reformation of land that led to the concept of the earlier supercontinent – Pangea.

Creation scientists and Flood geologists do not disagree that the continents may have been connected together in the past as a single supercontinent according to Genesis 1:9. In fact, it was a Christian geologist by the name of Antonio Snider in 1859 who first remarked on this jigsaw puzzle fit of all the continents. But he held that the separation of the continents happened catastrophically during the Genesis Flood (Genesis 7).

The main variance between the secular and the biblical scientists is the timing. While the secular scientists state that these transactions took place gradually over millions of years, creation scientists believe it all occurred by catastrophic event, involving continental sprint rather than continental drift.

Scientific proofs for the “Continental Shift” during the Flood

There are several proofs that support the pre-Flood supercontinent split and the resultant continents shifting apart catastrophically during the Flood. Here are some:

1-Folded Fossil-Bearing Sediment. The fossil-bearing sedimentary layers created by the Flood throughout the world contain a large amount of plants buried and fossilized in coal beds. These layers are found in the Appalachian Mountains of the United States and in the Ural Mountains of Russia.

2-Basalts. There are large zones consisting of thick volcanic rock layers laid on top of one another which are found in a number of areas on today’s continents. The two largest examples are the Siberian Traps and the Deccan Traps of India.

3-Apes buried before man. In the post-Flood sediments of Africa there are fossilized remains of apes. On top of them are found fossilized human remains. Evolutionists claim that apes and then humans have slowly “evolved” from a common ancestor. However, in the Biblical view, the apes began migrating from the Ararat area to Africa as rapidly as they left the ark, coming early in the post-Flood period. But Noah’s offspring stayed at Babel and didn’t migrate into Africa until after the confusion of languages (Genesis 11:7). 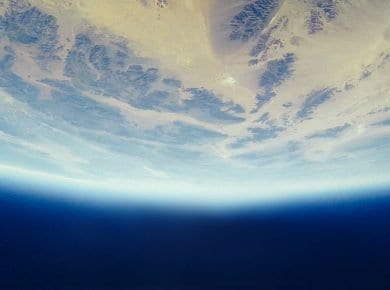 This answer is also available in: हिन्दीThe Bible doesn’t give the age of planet earth. Biblical scholars don’t know whether this planet was created at the beginning of creation week…
View Answer

This answer is also available in: हिन्दीIn order to find whether the world was created in six literal or symbolic days, we need to study the word “day” which is…
View Answer