There is no statement in the Bible that the Catholic faith is the true one. The Bible clearly points that the Papacy is the “beast” of Revelation.

8. Wars with and overcomes the saints (verse 7).

The “beast” of Revelation 13 is simply another name for the “Antichrist.”

Now, let’s examine each point that describes the “beast”:

1. It would rise from the sea (Revelation 13:1).
The sea (or water) in prophecy refers to people, or a populated area (Revelation 17:15). So the beast, or Antichrist, would arise from amid the established nations of the then-known world. The papacy, as we all know, arose in Western Europe.

2. The “beast” must receive its power, seat (capital), and authority from the dragon (Revelation 13:2).
To identify the dragon, we look at Revelation chapter 12, where God’s end-time church is pictured as a pure woman. In prophecy, a pure woman represents God’s true people or church (Jeremiah 6:2 Isaiah 51:16). The pure woman is portrayed as pregnant and about to deliver. The dragon crouches nearby, hoping to “devour” the baby at birth. However, when the baby is born He evades the dragon, fulfills His mission, and then ascends to heaven. The baby is Jesus, whom Herod tried to destroy by killing all the babies in Bethlehem (Matthew 2:16). So the dragon represents pagan Rome, of which Herod was a king. The power behind Herod’s plot was, of course, the devil (Revelation 12:7-9). Satan uses different governments to accomplish his work in this case, pagan Rome. The papacy received its power from pagan Rome.

The deadly wound was inflicted when Napoleon’s general, Alexander Berthier, entered Rome and took Pope Pius VI captive in February of 1798. Napoleon decreed that at the death of the pope, the papacy would be discontinued. The pope died in France in August of 1799. “Half Europe thought … that without the Pope the Papacy was dead.” So this point also fits the papacy.

4. The deadly wound would be healed, and the entire world would give homage to the beast (Revelation 13:3).

On February 11th, 1929, an historic treaty was signed between the Italian Government and the Vatican re-establishing the political power and diplomatic standing of the Catholic Church.

6. It would become a very powerful religious organization (Revelation 13:3, 8).

Since its healing, the strength of the papacy has grown and increased until today she is one of the most powerful religio-political organizations and influence-centers in the world. These three last points also point to the Papacy.

8. It would war with and persecute the saints (Revelation 13:7).
The papacy did persecute and destroy millions of saints during the Dark Ages. It is estimated that 50 million souls died for their faith.

The rule of the papacy began in A.D. 538 and ended in 1798 A.D. when Napoleon’s general, Berthier, took the pope captive with hopes of destroying both Pope Pius VI and the political, secular power of the papacy. This period of time is an exact fulfillment of the 1,260-year prophecy.

10. It would have the mysterious number 666 (Revelation 13:18).
This verse says, “It is the number of a man,” and Revelation 15:2 says it is “the number of his name.” What man do you think of when you think of the papacy? We all think of the pope. What is his official name? Here is a Catholic quote: “The title of the pope of Rome is “Vicarius Filii Dei” (English: “Vicar of the Son of God”) Answers to Readers’ Questions,” Our Sunday Visitor, Nov. 15, 1914.

Malachi Martin, in The Keys of This Blood, uses the same title for the pope on pages 114, 122. A footnote for Revelation 13:18 in some Douay [Catholic] versions of the Bible says, “The numeral letters of his name shall make up this number.”

How do we derive the number of his name? By adding the numerical value of the Roman numerals of the title Vicarius Filii Dei, we actually come to a definite number 666. Again, the papacy fits this identification point.

No other power in history could possibly fit these 10 divine descriptive points.

This answer is also available in: हिन्दीMary was undoubtedly a godly woman (Luke 1:28). But the Catholic Church teaches that she was not just godly but without sin (Catechism of…
View Answer 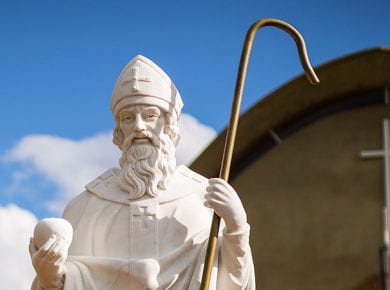 This answer is also available in: हिन्दीSt. Malachy, whose family name was Ua Morgair, was born in Armagh in 1095. Malachy was ordained priest by St Cellach in 1119 and…
View Answer