The word Antichrist is a combination of two words: “anti” which means “against” or “in the place of,” and “Christ,” which means “anointed one.” Therefore, in a general sense anybody that opposes Christ or attempts to take His place is an Antichrist.

The original “Antichrist” is Satan, who has opposed Christ through various human agencies. Long before man was created, Satan sought to displace Christ (Isa. 14:12–14; Eze. 28:12, 13) and has since inspired all opposition to God and to Christ.

However, Paul points to one specific power that will defy God “And then the lawless one will be revealed… The coming of the lawless one is according to the working of Satan, with all power, signs, and lying wonders” (2 Thess. 2:8, 9). And he describes the work of this fallen entity “the man of sin is revealed, the son of perdition, who opposes and exalts himself above all that is called God or that is worshiped, so that he sits as God in the temple of God, showing himself that he is God” (2 Thessalonians 2:3,4).

Paul’s words depict an arrogant power that opposes all entities in the field of religion and permits no rival to receive the worship it claims for itself. This power assumes divine prerogatives, with reference to the true God and not simply pagan deities by the entrance of this power into the temple of God and seating its representative there. The representative taking his seat in the inner sanctuary of the temple reveals that he claims to sit “as God,” that, indeed, “he is God,” which is the ultimate blasphemy. So, the Antichrist is a blasphemous power and not just one man.

In addition to Paul’s prophecy, Daniel’s prophecy of the blasphemous power that succeeds that of pagan Rome (Dan. 7:8, 19–26), and John’s prophecy of the leopard like beast (Rev. 13:1–18), all reveal the similarities between these three descriptions. This leads to the conclusion that Daniel, Paul, and John are speaking of the same power. This power is identified by many Bible commentators as the papacy or Antichrist.

This page is also available in: हिन्दी (Hindi)“Then a third angel followed them, saying with a loud voice, “If anyone worships the beast and his image, and receives his mark on his…
View Answer 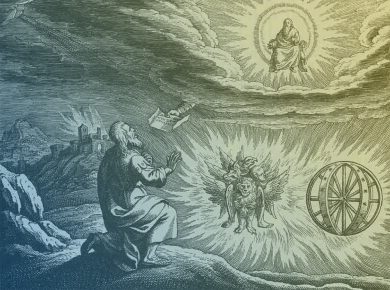 Table of Contents Ezekiel 1:26-28No man has seen GodThe Lord reveals Himself to people in vision or in different forms:The purpose of Ezekiel’s vision This page is also available in:…
View Answer