Sadly, sinners are depicted as enemies of God (Romans 5:10; 8:7; John 15:18, 24; 17:14). And for them there is no peace and no assurances of hope (Isaiah 57:20). They have broken God’s commandments (Romans 8:7).  Consequently, they are in a state of guilt and sin. Sinners are full of fear because of their troubled conscious. But after they get saved, they obtain peace with God because their sins have been forgiven and their heavenly records are cleansed by the blood of Jesus (Psalm 103:10-12).

There is more to justification

However, justification is more than just a clearing of a sinner’s legal record before God (Romans 3:20, 28; 4:25). Because forgiveness alone does not necessarily bring peace. The person who has been forgiven for some wrong act may feel a sense of gratefulness toward his forgiver. But at the same time he may also feel shame and avoids the company of his forgiver. Even though he is forgiven, he may feel embarrassed. His self-respect is crushed. Therefore, justification means more than just forgiveness for past sins. It means transformation of the old ugly self to the image of Christ.

The actual transformation of the believer

The only way in which the divine image can be imprinted on humanity is by a daily relationship with Christ through study of the Word and prayer (John 15:4). Thus, the Lord not only pardons, He also reconciles and sets sinners right with Himself. He even treats them as if we had never sinned, by imputing the righteousness of His Son to cover their sinful past (Romans 4:8). He invites people to a fellowship with Jesus that will fill them with courage and hope for the future and provides them with an example to copy (John 15:4).

It would not be conceivable for humans to have a new spiritual relationship of peace except for the transformation that is accomplished by a spiritual rebirth (John 3:3; 1 Corinthians 2:14). Therefore, when God justifies the converted sinner, He also creates a clean heart and renews a right spirit within him (Psalms 51:10). Then, “the peace of God, which surpasses all understanding” will take over the converted soul (Philippians 4:7). 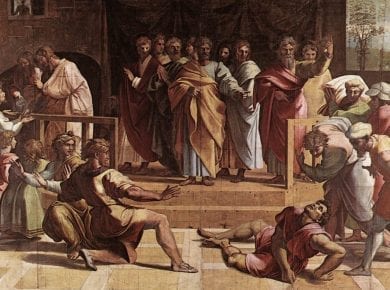 This answer is also available in: العربيةJust as there had been a Judas among Jesus’ disciples, so in the early pure church, there were some who were not honest in…
View Answer

This answer is also available in: العربية“So then faith comes by hearing, and hearing by the word of God” (Romans 10:17). Faith is our conviction about things that we cannot see…
View Answer