Prediction: “Verily I say unto you, There be some standing here, which shall not taste of death, till they see the Son of man coming in his kingdom” (Matthew 16:28).

Fulfillment: “And after six days Jesus taketh Peter, James, and John his brother, and bringeth them up into an high mountain apart, And was transfigured before them: and his face did shine as the sun, and his raiment was white as the light. And, behold, there appeared unto them Moses and Elias talking with him” (Matthew 17:1-3).

Elijah was taken alive to Heaven: “And it came to pass, as they still went on, and talked, that, behold, there appeared a chariot of fire, and horses of fire, and parted them both asunder; and Elijah went up by a whirlwind into heaven” (2 kings 2:11), while, Moses received a private resurrection by Jesus (Michael): “Yet Michael the archangel, when contending with the devil he disputed about the body of Moses, durst not bring against him a railing accusation, but said, The Lord rebuke thee” (Jude 9). So, both Elijah and Moses were taken to heaven and did appear to Christ and some of the disciple at the transfiguration of Christ. 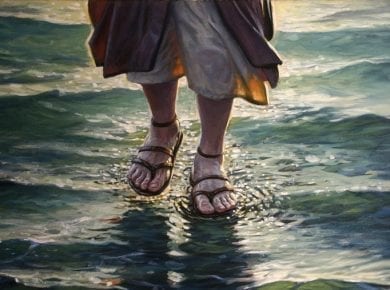 This answer is also available in: हिन्दीJesus walked on water to strengthen the weak faith of His disciples. The following passage from the classic book “The Desire of Ages” describes…
View Answer