How long was Jesus on the cross? to be specific how many hours did Jesus hang on the cross?Jesus Christ hanged on the cross for about six hours. The gospels of Matthew, Mark, and Luke use the Jewish method of measuring time while the gospel of John uses the Roman method because it was written near the close of the century, and chiefly for Gentile believers.

Using the Roman method of measuring time,  the apostle John documented that Jesus’ trial before Pontius Pilate took place, “about the sixth hour” (John 19:14). Counting from midnight, Jesus’ trial was about 6:00 A.M.

Using the Jewish method of measuring time, Mark wrote, “They crucified him and divided his garments among them, casting lots for them, to decide what each should take. And it was the third hour when they crucified him” (Mark 15:24–25). Counting from sunrise, Jesus’ crucifixion started at 9:00 A.M.

Also using the Jewish method of measuring time, Matthew added that “from the sixth hour there was darkness over all the land until the ninth hour” (Matthew 27:45). The sixth hour is noon. The non-canonical Gospel of Peter (sec. 5; see p. 128) confirms that “it was noon, and darkness came over all Judaea.” Jesus had been upon the cross now for approximately three hours. The darkness continued from 12:00 noon to 3:00 P.M. till Jesus gave up the ghost (Matthew 27:50). Then, to make sure of Jesus’ death, a Roman soldier “pierced His side with a spear, and immediately blood and water came out” (John 19:34).

So, according to the Roman measuring of time:

Pilate condemns Jesus at “about the sixth hour” or about 6:00 A.M.

Then, according to the Jewish measuring of time:

Jesus is crucified three hours later at “the third hour” or 9:00 A.M.

Darkness starts at “the sixth hour” or 12:00 P.M. while Jesus is hanging on the cross.

God gave us enough evidence to the divinity of Jesus Christ in both the Old and New testaments. Let’s examine the proofs: 1-Holy OT prophets stated that Jesus is God…
View Answer 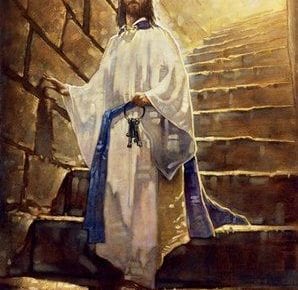 Question: Did Jesus go to hell after His death to collect the keys of life and death? Answer: Jesus did not go to hell when he died to receive the…
View Answer