The book of Isaiah in the Bible is divided to three sections. Chapters 1–35 comprise mainly of a series of condemnations against sin and declarations of God’s judgments to follow. Chapters 36–39 are mainly historical rather than prophetic in nature. They deal with Sennacherib’s invasions, Hezekiah’s illness and recovery, and the visit of Babylonian envoys. These chapters are parallel to content found in 2 Kings 18:13–20:19.

Chapters 40–66 constitute the most important part of Isaiah’s prophecy. In these chapters, the message of the prophet is completely changed in tenor and theme. Declarations of judgment are largely in the past, and the rest of the book deals with promises of God’s blessings upon the blameless. Therefore, it is mainly chapters 40–66 that have gotten Isaiah the name of “gospel prophet.”

In these chapters, Isaiah writes about the glorious future of Israel as God’s faithful “servant,” the salvation from every enemy, the approaching of Messiah, and the founding of the Messianic kingdom.

There are many prophecies about the coming Messiah, His nature, His mission, His life, and His self-sacrificing death. This section also talks about the growth of the church and of the calling of the Gentiles. In addition, there are glorious images of the earth restored to Edenic glory and peace. Throughout this part, Israel (the inhabitants of Judah after the dissolving of the northern kingdom) appears as the chosen people of God, His “servant,” His “elect,” in whom He “delights” (Isaiah 42:1).

Comparison between the first and last sections

In first section, Isaiah gives a message of rebuke but in the last, he gives a message of comfort and hope. The first section deals largely with the unrighteousness of the people but the last with the righteousness of God. While, the first section deals mainly with the success of the enemy in drawing God’s people away from their high standards, the last section deals with the Lord’s success in drawing Israel back to its supreme stand as the light of the world. Assyria, the main enemy of Judah (chs. 1–39), is no longer there. And through the prophet Isaiah God prepares His faithful for an even worse tragedy which is the Babylonian captivity that will take place a century later.

Beginning with chapter 40, God encourages Israel who is disheartened because of failing to realize God’s plan for them as a nation. And He calls them to hope in the glorious plans that lie ahead after their return from exile.  Here is an outstanding image of the Messiah as God’s Son, and of the people walking in His footsteps. God’s children are reclaiming their appointed position as His ambassadors in earth. They are saved from Babylon; they repossess their land. And thus, the waste places of earth become “like the garden of the Lord” (Isaiah 51:3). 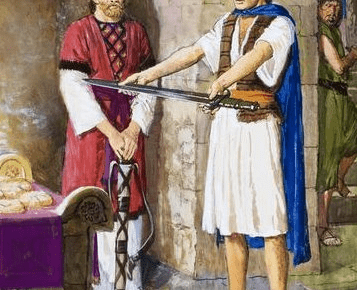 This answer is also available in: हिन्दीThere is no error in the Bible for Abiathar was the Son of Ahimelech. And Abiathar also had a son that was named Ahimelech…
View Answer

This answer is also available in: हिन्दीThe Old Testament books were the only scriptures that Christ and His disciples had. Jesus referring to the Old Testament said, “Think not that…
View Answer