Once we know that something is right according to God’s Word, our duty is to stand up for God and not compromise. And God will do mighty things for all that stand up for His truth. “For the eyes of the LORD run to and fro throughout the whole earth, to show Himself strong on behalf of those whose heart is loyal to Him” (2 Chronicles 16:9).

When trials and troubles surround us, we need not be afraid. When the children of Israel reached the borders of the Red Sea and their Egyptian masters were pursuing after them to re-enslave them, they were very afraid. But Moses told them, “Do not be afraid. Stand still, and see the salvation of the LORD, which He will accomplish for you today” (Exodus 14:13).

In Daniel 3, we read the story of 3 individuals who stood for God on pain of death. King Nebuchadnezzar ordered all people to worship him or be thrown in fire. But Shadrach, Meshach, and Abednego refused to obey the king’s command and were thrown in the fire. But God saved these 3 young men from the deadly fire and as a result the king believed in the Lord.

When we stand firm for truth, our lives will be a witness to people and to the universe for “We have been made a spectacle to the whole universe, to angels as well as to human beings” (1 Corinthians 4:9). God’s character gets vindicated before the universe by the steadfast life of His children on earth.

The good news is that Christ has not left us to stand up for His Word by our own power. He has provided all the strength necessary for victory. For all things are possible with Him including a life without compromise (Matthew 19:26). He has also provided His own armor of salvation to protect us (Ephesians 6:11, 13). 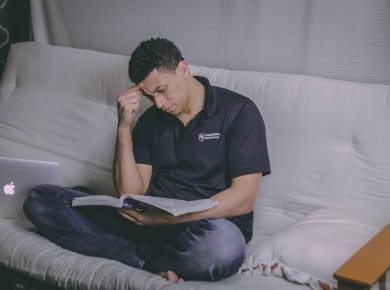 Fire purifies the soul Often times we wonder where God is and why we’re going through a crisis. Does God test us? If so, why is it by fire? The…
View Answer

Some think they must reach God’s high standard by their own efforts. But Jesus said, “Without Me ye can do nothing” (John 15:5). The Lord assures us that the power…
View Answer