Christianity is not a blind faith. In fact, we as Christians can hold to our faith with actual proof that help show that the Bible is true. The following will show some of these proofs:

We can see some examples of proof in the extensive prophecies dealing with individual nations and cities through the course of history in general. In addition, there are more than 300 prophecies that were fulfilled by Christ Himself at His first coming.

Other prophecies deal with the spread of Christianity, such as the prophecy of Christ’s first coming. This prophecy can be found in Daniel 9. In that chapter, we can find the exact year of Christ’s baptism (27 A.D.) as well as Christ’s crucifixion (31 A.D.). This was 600 years before it actually happened. The Bible is the only religious book that contains 20% prophecy – a lot of which has already been fulfilled. Here are some of these Bible prophecies:

The Old Testament predictions of the Messiah to come were so specific and so clearly fulfilled by Jesus of Nazareth. There are more than 125 of these prophecies. Let’s review just 12 of them:

Another striking evidence of divine inspiration is found in the fact that many of the principles of modern science were recorded as facts of nature in the Bible long before scientist confirmed them experimentally. A sampling of these would include:

The greatest miracle of the Bible is its unity. The 66 books of the Bible were written on three continents; in three languages; by about 40 different people; with totally different backgrounds; over a period of about 1,500 years; on the most controversial subjects; by people who, in most cases, had never met. Yet, though it seems totally inconceivable, the 66 books maintain harmony with each other.

We find that both the Old and New Testaments are strongly supported by manuscript evidence (the evidence of early hand written copies). Furthermore, the famous Dead Sea Scrolls are another example of the Old Testament evidence. These documents came from the “library” of a settlement founded at Qumran before 150 B.C. and abandoned about 68 A.D. Some of the manuscript copies were made during that period, and some were written earlier (third century BC) and brought to the settlement. As a result, the Dead Sea Scrolls match the Hebrew text behind today’s Old Testament, in spite of the passage of over 2,000 years (where one would expect errors to creep in).

Another proof that helps us know that the Bible is true can be found in archaeology. Ancient artifacts unearthed by archaeologists repeatedly confirm the accuracy and truth of the Bible. Sometimes, temporarily, evidence may not be found to substantiate certain historical facts from the Bible, but in time the evidence surfaces. Note the following:

You can also find in secular history support to show the Bible is true. One example, in The Antiquities of the Jews, book 18, chapter 3, paragraph 3 the famous historian Flavius Josephus writes:

“Now, there was about this time Jesus, a wise man, if it be lawful to call him a man, for he was a doer of wonderful works—a teacher of such men as receive the truth with pleasure. He drew over to him both many of the Jews, and many of the Gentiles. He was [the] Christ; and when Pilate, at the suggestion of the principal men amongst us, had condemned him to the cross, those that loved him at the first did not forsake him, for he appeared to them alive again the third day, as the divine prophets had foretold these and ten thousand other wonderful things concerning him; and the tribe of Christians, so named from him, are not extinct at this day.”

The testimony of Jesus

In the New Testament, we see that Jesus testified to the accuracy and reliability of the Old Testament. We know that His testimony is true because of His perfect sinless life and mighty miracles (healing all sickness, raising the dead, having authority over nature and getting resurrected). Jesus said: “the Scripture cannot be broken” (John 10:35), thus testifying to the authority of the Bible. In Matthew 5:17, He added, “Do not think that I have come to abolish the Law or the Prophets; I have not come to abolish them but to fulfill them,” meaning that Jesus believed and trusted in the Old Testament “Law” and “Prophets.”

We hope these points has helped strengthen your faith in God’s word to know that the Bible is true, and reliable. If you have any more questions, please feel free and write to us anytime.

This answer is also available in: हिन्दीMost Christians are reasonably familiar with the events surrounding the day of Pentecost.  The faithful are in one accord and the Holy Spirit manifests…
View Answer 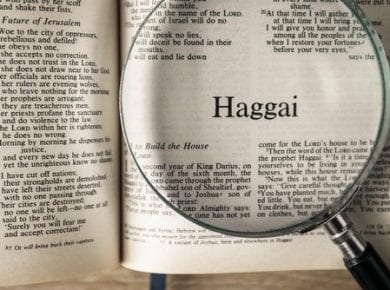 This answer is also available in: हिन्दीHaggai was the first of the three post-exilic Minor Prophets. The name Haggai means “festal,” or “festive.” Some believe he was so advanced in…
View Answer