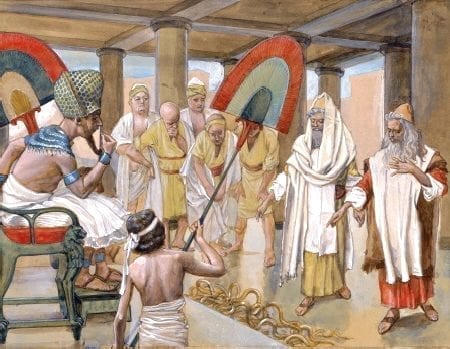 There is an incident at the beginning of Exodus where Moses performed a miracle and turned the rod of Aaron into a serpent. According to Exodus 7:15–18, Moses was directed to go before Pharaoh to request that Israel be permitted to leave Egypt. It was clear that Pharaoh would require God’s servants to show their powers to confirm their claim of being the messengers God.

God said to Moses, “When Pharaoh speaks to you, saying, ‘Show a miracle for yourselves,’ then you shall say to Aaron, ‘Take your rod and cast it before Pharaoh, and let it become a serpent’” (Exodus 7:9). But Pharaoh also called the wise men and the sorcerers; so the magicians of Egypt, they also did in like manner with their enchantments. For every man threw down his rod, and they became serpents (v. 11, 12).

The wise men were educated in writing and sciences of the time. The “sorcerers” were charmers, who claimed to be able to produce magic spells. Magic was the object of much study in the land of Egypt. Their magic consisted of charms that were thought to have power over and beasts in particular reptiles. But the source of their strength to performing these wonders was done by the power of evil spirits, in addition to trickery. The Bible teaches that devils also have powers and they can work incredibly convincing miracles (Revelation 13:13, 14).

The rods of the magicians did not actually become serpents, as did the rod of Aaron. For neither the magicians nor Satan himself could create life. But it was through the power of evil magic, that their rods were made to appear like serpents. The magicians’ serpents were mere images and not real serpents.

And Aaron’s serpent turned upon its rivals and swallowed them, exhibiting marked superiority to them. Thus the supremacy of the God of the Hebrews was illustrated in the very first miraculous sign performed in Pharaoh’s presence.

Later, we see the magicians’ limited powers in Exodus 8:18, when they tried their magic to stop God’s third plague on the land of Egypt but could not get results. At that point they gave up and admitted, “This is the finger of God.”

This answer is also available in: हिन्दीScience and Scripture have a common Author, which means that the facts of natural science are in harmony with God’s Word. While scientists may…
View Answer