This story of the lepers that helped end the famine in Samaria is in found in 2 Kings chapters 6-7. Ben-Hadad king of Syria besieged Samaria and caused a great famine so that a donkey’s head was sold for eighty shekels of silver, and one-fourth of a kab of dove droppings for five shekels of silver (2 Kings 6:24).

One day, Joram, the king of Israel, was passing by on the wall, a woman asked him to give her justice for she protested that another woman, said to her, give your son that we may eat him today, and we will eat my son tomorrow but on the next day she hid her son (v. 28,29). The king was greatly troubled of what has become of his people. Moses had warned Israel that if they left God, they will face such famines (Lev. 26:29; Deut. 28:53). Now, this prophecy met its dreadful fulfillment.

Elisha, God’s prophet, also had warned the people to repent or face distress. And now the king placed the blame on Elisha for the famine and set to kill him. But Elisha answered, “Hear the word of the LORD. Thus says the LORD: ‘Tomorrow about this time a seah of fine flour shall be sold for a shekel, and two seahs of barley for a shekel, at the gate of Samaria” (2 Kings 7:1).

This meant that on the next day, 24 times that amount of wheat would be sold for a fifth the price. Or in other words, the amount of money that during the famine would buy some of the cheapest item that could be used to maintain life, would on the following day buy 120 times as much of the finest wheat flour. Full of doubt, the king’s close officer said to Elisha, “Look, if the LORD would make windows in heaven, could this thing be?” And Elisha replied, “In fact, you shall see it with your eyes, but you shall not eat of it” (v.2).

The fulfillment of God’s Word

There were four lepers at the entrance of the gate who said to one another, why are we starving waiting to die here? Let us surrender to the army of the Syrians (v. 3). So, they went to the camp of the Syrians; and to their surprise no one was there. For the Lord had caused the army of the Syrians to hear the noise of chariots and the noise of horses—the noise of a great army and they thought that the king of Israel has hired against them the kings of the Hittites and the kings of the Egyptians to attack them. So, they fled leaving their tents, their horses, and their donkeys. And, the amazed lepers went into the tents and ate and carried out silver, gold and clothing.

But then they felt guilty for being selfish while their people are starving and decided to tell their king that night of their discovery (v. 9). When the king heard the news, he sent some to investigate the matter for he suspected that this maybe a trap (v. 12). And sure enough they found that the Syrian army has fled.

Then, the starving Israelites went out and plundered the tents of the Syrians. So, a seah of fine flour was sold for a shekel, and two seahs of barley for a shekel, according to the word of the LORD (v. 16). Now the king had appointed his close officer to have charge of the gate. But the people trampled him in the gate, and he died, just as the man of God had said (v. 17). What God says will surely come to pass. For “Heaven and earth will pass away, but my words will never pass away” (Matthew 24:35).

It was by such experiences that the Lord was repeatedly drawing the children of Israel back to faith and obedience to Him. For many years the people had been worshiping idols and suffering as a result the sad consequences of their apostasy. God’s chosen people left righteousness and the devil stripped from them every blessing. So, they needed to see a new revelation of God’s power of deliverance and that He wanted them to walk in the paths of mercy, justice, and truth to reap His benefits (Deut. 28:1-14). 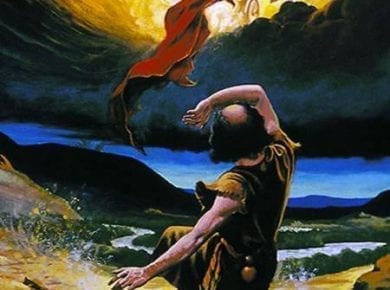 This answer is also available in: हिन्दीIn the Old Testament, the blessings of God were given in double portions. For example, parents gave their first born a double blessing: “He…
View Answer