Stephen was not known to Rome since he was not a public figure like Jesus. And he didn’t have a background of opposing the Jewish religious leaders. Therefore, Rome would not respond to his stoning since the matter didn’t bear political connotation. The stoning of Stephen was a strictly a Jewish matter that could be settled by the Sanhedrin without any Roman interference. It was not an issue of national security. So, the Jews took the liberty to stone Stephen to death in Jerusalem (Acts 7:58).

Stoning was the penalty for blasphemy under the Mosaic law (Lev. 24:14–16; John 8:7). But even if the Jewish leaders have been adhering to this law, under the Romans they had no right to take life, particularly if Stephen was a Roman citizen (Acts 6:5). The Sanhedrin figured that the Roman officials could be bribed into convenient silence as was the case at Jesus death. Pilate, who was still procurator, may have been out of the city at the time, but would be unlikely to get involved with the opposition to Stephen after his humiliating experience at the trial of Jesus.

Unlike Stephen, Jesus was a national figure and loved by all people but hated by the religous leaders (John 11:57). Therefore those leaders sought permission from Rome to kill him. If they attempted to kill Him, this would have caused a national uproar against them. So, they feared that their authority may be crushed by the Romans. They wanted the Romans to administer the punishment themselves to relieve them from that responsibility. The Jewish religious leaders wished to appear loyal to Rome for they said to Pilate “We have no king but Caesar” (John 19:15).

Table of Contents Origin of SatanWhat happened in HeavenLucifer becomes SatanOutcome It’s true, Satan was once a glorious angel in Heaven. There are several Bible texts that explain to us…
View Answer 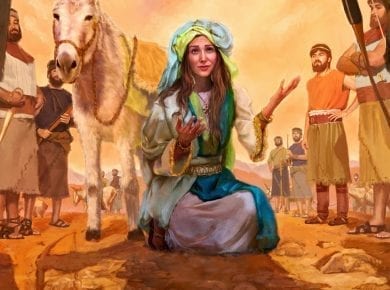 About Abigail and Nabal, the Bible records, “Now Abigail went to Nabal, and there he was, holding a feast in his house, like the feast of a king. And Nabal’s…
View Answer