Jonathan was a man of faith and nobility. His trust in God was first revealed when he accompanied his father King Saul to war against the Philistines (1 Samuel 14).

Jonathan attacks the enemy with his armor-bearer

Jonathan didn’t want to be detained by his father‘s unbelief and fears, so he took his armor-bearer and went alone to the edge of the enemy camp (verse 3). Being filled with faith in God’s power to deliver, he said to his armor-bearer, “Perhaps the Lord will act in our behalf. Nothing can hinder the Lord from saving, whether by many or by few” (verse 6).

In faith, Jonathan attacked the camp and killed twenty Philistines (verse 14). And the Lord sent an earthquake which caused a great panic among the enemy lines (v. 15). At this point, King Saul and his troops joined him by following the terrified army and overcame them. “So the LORD saved Israel that day, and the battle shifted to Beth Aven” (v.23).

Jonathan accepted God’s plan and made peace with David whom he loved unselfishly (1 Samuel 18:1) even though he knew that one day David would take his place and reign over Israel (1 Samuel 18:1–3). When King Saul planned to kill David, Jonathan warned David of his father’s plans and he escaped (1 Samuel 19:1–2).

And Jonathan made a covenant with the house of David (1 Samuel 20:16). But when Saul sensed of Jonathan’s support to David, he tried to kill him by throwing a spear at him (1 Samuel 20:33). And he called him a “stupid son of a whore” (1 Samuel 20:30). But his father’s actions didn’t deter him from standing for what is right.

At the end, Jonathan died an honorable death defending Israel in a battle with the Philistines (1 Samuel 31:2), whereas King Saul who got wounded fell on his word and killed himself. Jonathan left a five-year-old son, Mephibosheth who was crippled (2 Samuel 4:4). And King David, in honoring his covenant to Jonathan, protected Mephibosheth and treated him as one of his own family (2 Samuel 9).

You can renew your mind after falling away from God by following few simple steps: First, you need to come to the Lord as you are. The Lord promised that He will not…
View Answer 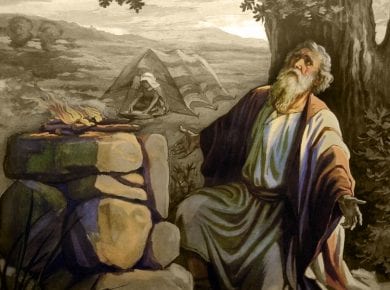 Can a normal person enjoy putting a knife into an innocent lamb? Yet, God commanded the offering of animal sacrifices for the atonement of sin from the entrance of sin…
View Answer