“The Lord possessed me at the beginning of His way, before His works of old” (Proverbs 8:22).

The meaning of the passage in Proverbs 8:22-31 has been the cause of much discussion through the ages. And Jehovah’s Witnesses especially have tried to say that based on this verse, Christ was created and that there was a time when He was not in existence. They add that He was brought forth, by the Father as the beginning of His work of creation

But true Bible students understand that strict conclusions from figurative passages are unjustified. Confirmation of doctrinal beliefs should always be sought in the literal statements of the Bible. Because this passage is figurative, it should not be understood beyond what the original writer intended. Bible students must not take one verse and build a doctrine on it, rather they should study every verse in the light of all other verses in the Scriptures. Therefore, interpretations derived must always be in harmony with the analogy of whole Scriptures.

The Scriptures clearly teach that Christ had no beginning of time and that He is eternal as seen in the following verses:

“But you, Bethlehem Ephrathah, though you are little among the thousands of Judah, yet out of you shall come forth to Me the One to be Ruler in Israel, whose goings forth are from of old, from everlasting” (Micah 5:2).

“I am the Alpha and the Omega, the Beginning and the End,” says the Lord, “who is and who was and who is to come, the Almighty” (Revelation 1:8).

“I am the Alpha and the Omega, the Beginning and the End, the First and the Last” (Revelation 22:13).

Thus, the Lord Jesus Christ, the divine Son of God, existed from eternity, a distinct person, yet One with the Father. In the light of these statements, the reading of modern translations that depart from the Hebrew to follow the LXX and read “created” instead of “possessed” (for example, RSV), can lead to unjustified deductions. While there is a reference to Christ, He is presented in the figure of wisdom. 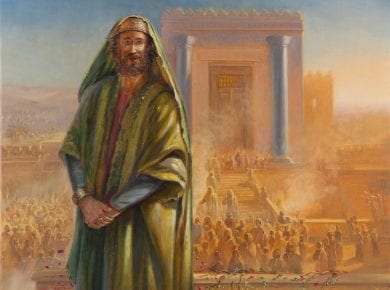