1-In Gen. 18, it says how Jesus, along with two of His angels, visited Abraham.  Starting in Gen. 18:13, He is called “the LORD.”  Whenever the word LORD appears in scripture with all caps, this identifies God’s name Jehovah or Yahweh.  As this chapter ends, two of the men begin a journey to Sodom while Jesus remains behind to tell Abraham that Sodom will be destroyed. Upon learning of Sodom’s upcoming destruction, Abraham intercedes on their behalf to Jesus.

2-In Gen. 32:24-30, it says how Jacob wrestled with a being. This being was Jesus Christ. Since Jacob held his own against Jesus in the wrestling match, he was granted a blessing.  His name was changed to Israel.  Israel means “he who prevails with God” or “he will rule as God (rules).”  Jacob had literally prevailed with God by wrestling with Him in the person of Jesus. Jacob realized who he wrestled with in Gen. 32:30 by naming the place Peniel, meaning “the face of God,” knowing he had seen Him and lived.

3-In Judges 6:11-24, the soon-to-be judge Gideon is greeted by the Angel of the Lord. The Angel of the Lord sat down under an oak tree. Gideon asks why the Lord had not fulfilled the wonders God promised the people of Israel that he was waiting for. The reaction was that “the LORD turned to him” and replied, which identifies the Angel as the Lord Himself. Gideon later brought food that the Angel of the Lord’s staff consumed with fire, followed by a dramatic disappearance. Gideon’s reply to such a sight in verse 22 was, “Ah, Sovereign LORD! I have seen the angel of the LORD face to face!” He feared dying from seeing the living God. Absent in form but still clearly present, the Lord replies in voice in verse 23, “Peace! Do not be afraid. You are not going to die.” Clearly, this angel was no angel at all, but the Lord God Himself!

4-Another example where Jesus appeared in the Old Testament can be found in Genesis 16-7-13, Hagar, calls the Angel of the Lord “LORD,” “God,” and “One.”

5-In Exodus 3:2-6, the Angel of the LORD declares Himself to be God from the burning bush to Moses with the use of the title “I Am.” Jesus claimed that title for Himself in John 8:58. Jesus by saying He was “I Am” was the great Yahweh, also known to us today as Jehovah God.

6-In Josh. 5:13-15, it speaks of how Christ appeared to Joshua.  Joshua was near Jericho when he saw a man with a sword drawn.  Immediately Joshua wanted to know if he was friend or foe and he was told by the man that he was captain of the Lord’s host. Upon hearing this, Joshua fell on his face and worshiped him.  This man did not stop Joshua from worshiping Him as any other servant of the Lord would do (Acts 10:26; 14:15; Rev. 19:10; 22:9 where servants of God stopped other men from worshiping them).  Joshua asked Jesus what His message was and Jesus responded by telling Joshua to take off his shoes because he was on holy ground, which is the same thing he told Moses in Exodus when He appeared to him in a burning bush.

7-The last example of Jesus in the Old Testament was with the prophet Hosea who also refers to the Lord both as God and as an Angel (Hosea 12:3, 4).

Those were some mentions where Jesus appeared in the Old Testament in Heavenly form. After His ministry on earth, He also appeared several times in the New Testament as well.

This page is also available in: العربية (Arabic) हिन्दी (Hindi)In Matthew 13:10, 11, 12, we read: “And the disciples came, and said unto him, Why speakest thou unto them in…
View Answer 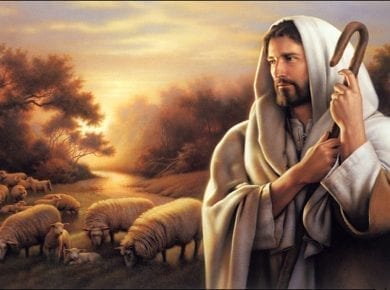 This page is also available in: العربية (Arabic) हिन्दी (Hindi)The Old Testament prophecies of the Messiah to come were so specific and so clearly fulfilled by Jesus of Nazareth that…
View Answer