In this first vision, the prophet Ezekiel did not see the Divine Being Himself, but rather a representation of the Divinity (v. 10).  In describing the Being as a man, the prophet used great caution, using two terms, “a likeness like the appearance of a human.” For humans can’t give an accurate description of His real essence.

No man has seen God

The truth is that “no man hath seen God at any time” (John 1:18), that is the Father. Sinners cannot behold the face of God and still live. Not even Moses, the great prophet of Israel, was allowed to see Him (Exodus 33:20; Deuteronomy 4:12). He hid his face when he came into the presence of the Almighty (Exodus 3:6). And Job while in God’s presence, detested himself and repented in dust and ashes (Job 42:6). For the Eternal Father dwells “in the light which no man can approach unto; whom no man hath seen, nor can see” (1 Timothy 6:16).

Some of the prophets have witnessed the glory of the Lord’s presence (John 1:14). But except in vision, none have seen the divine Person. When Isaiah saw a vision of the Lord in His holiness and glory, the prophet was filled with horror as to his sinfulness and insignificance of man (Isaiah 6:5). He realized his own emptiness in comparison with the Eternal. And he was filled with guilt in the presence of the “Holy One of Israel” (Isaiah 5:24).

The Lord reveals Himself to people in vision or in different forms:

The purpose of Ezekiel’s vision

In this vision, the Lord gave Ezekiel the needed assurance of the legitimacy of his call. And He added the necessary authority to his message. The prophet saw the firmament and the Lord’s throne directly above the heads of the living creatures that stand in God’s presence. This brought comfort to his heart. For he realized that the Lord, who sits above the cherubim, is in control. And that He protects His people. And he saw that every earthly kingdom that would attempt to rise against the God of heaven will not succeed. Also, the prophet beheld God’s rainbow above the throne which reminded him of His promise of mercy that was given at the very beginning of earth’s history (Genesis 9:13). 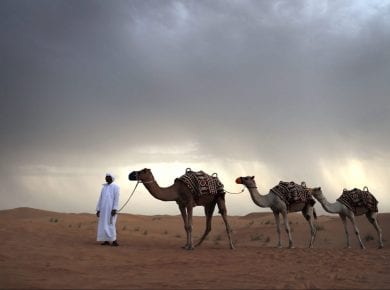 This page is also available in: हिन्दी (Hindi)God promised Abraham that his barren wife Sarah will bear a son – Isaac. He also promised that Isaac, not Ishmael, would be…
View Post