The Children of Ramah

The Bible does in fact predict that there was heard crying and weeping in Ramah because of the death of Children. It was Jeremiah who prophesied, “Thus says the LORD:

“A voice was heard in Ramah, lamentation and bitter weeping, Rachel weeping for her children, refusing to be comforted for her children, because they are no more.” Thus says the LORD: “Refrain your voice from weeping, and your eyes from tears; for your work shall be rewarded, says the LORD, and they shall come back from the land of the enemy” (Jeremiah 31:15,16).

The words of Jeremiah, concerning the Children of Ramah, initially referred to the sad experiences of the Hebrew captives taken from Jerusalem to Babylon in 586 B.C. (Jeremiah 31:15). Ramah was near “the border of Benjamin at Zelzah” (1 Samuel 10:2). This city (probably modern Ramallah) was situated on the path which the Jewish exiles would be taken to Babylon (Jeremiah 40:1).

Rachel died in this area at the birth of Benjamin (Genesis 35:18–20). Jacob’s wife called her son Ben-oni, “son of my sorrow” (Genesis 35:18). Thus, she is spoken of figuratively as the mother of all the children of Israel. And she is represented as witnessing the distress of her descendants and weeping bitterly for her children.

Through the Holy Spirit’s inspiration, Matthew also applied the words of Jeremiah to Herod’s killing of the infants of Bethlehem. He wrote,

Then Herod, when he saw that he was deceived by the wise men, was exceedingly angry; and he sent forth and put to death all the male children who were in Bethlehem and in all its districts, from two years old and under, according to the time which he had determined from the wise men. Then was fulfilled what was spoken by Jeremiah the prophet, saying:

“A voice was heard in Ramah,
Lamentation, weeping, and great mourning,
Rachel weeping for her children,
Refusing to be comforted,
Because they are no more.”

Ramah was a city in ancient Israel in the land allocated to the tribe of Benjamin, who was the daughter of Rachel, and was situated North of Jerusalem. Bethlehem was actually situated 10 miles south of Jerusalem, and was named the city of David who was of the tribe of Judah – Leah’s son. Why then did Matthew apply Jeremiah’s prophecy to the killings of the Children in Bethlehem?

Rachel, the daughter of Laban, was from the land Canaan. The Bible states:

Then they journeyed from Bethel. And when there was but a little distance to go to Ephrath, Rachel labored in childbirth, and she had hard labor… So Rachel died and was buried on the way to Ephrath (that is, Bethlehem). Genesis 35:16 & 19

Today, Rachel’s tomb is situated about a mile North, on he way to Bethlehem from Bethel. Rachel’s son Benjamin was actually the only son of Jacob to have been born in Canaan. Rachel might be considered the figurative ancestress of the Bethlehe-mites as well as the Ephraimites (Pulpit Commentary). Thus, when the children of Bethlehem were killed, it may be why Matthew used this to illustrate the fulfillment of Jeremiah’s prophecy.

The Lord comforts his children saying, your “Children shall come again.” This primarily refers to the return of the exiles from captivity. But secondarily, it refers to that time when restoration will be lasting, the time of the “restitution of all things” (Acts 3:21). This will take place at the second coming of Christ. Thus, the promises found in Jeremiah 31:16, 17 may well give comfort to any modern Rachel in Israel. They assure her that if she is obedient to God, her dead infants will be raised at the Day of Resurrection.

This answer is also available in: हिन्दीWhat is the purpose of speaking in tongues? Speaking in tongues in the Scriptures mean “languages.” God gives all the gifts of the Spirit…
View Answer 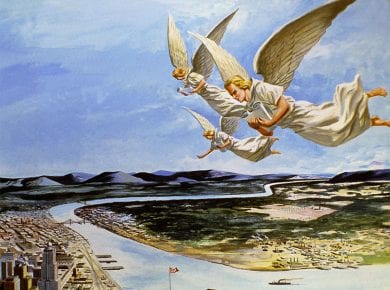 This answer is also available in: हिन्दीThe three angels’ messages of Revelation 14 contain God’s final warning to the world: The first angel’s message says, “Then I saw another angel…
View Answer