God always ordained “a time to laugh” (Ecclesiastes 3:4), after all: “A merry heart does good, like medicine, but a broken spirit dries the bones” (Proverbs 17:22).

So, while people back in Bible times would laugh, we don’t have any written jokes in the Bible. However, we do see in 1 Kings 18 where the  prophet Elijah used sarcastic comments in a joking way regarding the false prophets worship of Baal.

Then, Elijah said to the prophets of Baal, choose one bull for yourselves and prepare it first, for you are many; and call on the name of your god, but put no fire under it. So, they did. And they prayed O Baal,  hear us!” But no one answered. Then they leaped around the altar which they had made. But still there was no response.

At noon, Elijah mocked the Baal priests saying, “Cry aloud, for he is a god; either he is meditating, or he is busy, or he is on a journey, or perhaps he is sleeping and must be awakened” (v. 27).

Here, some translations such as the New Living Translation and English Standard Version, interpret the phrase “doing his business” as “relieving himself.” And the Contemporary English Version translation makes it even more clear when it translates it as “using the toilet.” Elijah is making fun of the false gods.

Obviously, Baal never answered his worshipers. On the other hand, the God of Israel sent His fire from heaven when Elijah prayed at the end of the day. And the fire of the LORD fell and consumed the burnt sacrifice, the wood, the stones, the dust, and it licked up the water that was in the trench (v. 38).

Through the humor in Elijah’s words, the people of Israel and the Baal priests could see that their false gods could not answer their prayers. And Elijah’s mocking words were not lost by the viewers who gathered that day to make their decision between God and Baal. And “Now when all the people saw it, they fell on their faces; and they said, “The LORD, He is God! The LORD, He is God!” (v. 39). All people acknowledged God as Lord. 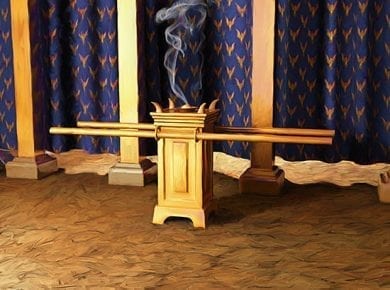 Of all articles of furniture in the tabernacle, the altar of incense appears to have been next in significance to the ark and the mercy seat in sacredness. This implies…
View Answer

People read the Bible today because it answers life’s most important questions. These questions are: Where did I come from? God created us in His image. We did not accidentally…
View Answer