Paul, testified before King Agrippa about his conversion experience. And he declared, “I was not disobedient to the heavenly vision, but declared first to those in Damascus and in Jerusalem, and throughout all the region of Judea, and then to the Gentiles, that they should repent, turn to God, and do works befitting repentance” (Acts 26:20). Some claim that in saying the phrase “do works befitting repentance,” Paul was not advocating righteousness by faith.

In this passage, Paul was not preaching righteousness by works. Instead, he was talking about the kind of “works” that accompany a life that has gained the righteousness by faith in Christ. And he did not mean that man can attain righteousness by doing certain works, but rather that true righteousness automatically brings forth corresponding good works that prove the ministry of the grace of God in the life.

Certainly Paul, like no other apostle, emphasized the amazing truth of the righteousness that is gained by faith through God’s saving grace. For he wrote, “But now the righteousness of God apart from the law is revealed, being witnessed by the Law and the Prophets, even the righteousness of God, through faith in Jesus Christ, to all and on all who believe. For there is no difference…Where is boasting then? It is excluded. By what law? Of works? No, but by the law of faith” (Romans 3:21, 22, 27). And he concluded, “For by grace you have been saved through faith, and that not of yourselves; it is the gift of God” (Ephesians 2:5–8).

Faith without works is dead

Whenever Paul wrote about the free gift of salvation, he also stressed, as in Acts 26:20, upon the good works that must accompany the faith (Romans 8:1–4). For he wrote that faith establishes the law: “Do we then make void the law through faith? Certainly not! On the contrary, we establish the law” (Romans 3:31).  And that we are “created in Christ Jesus unto good works” (Ephesians 2:10). Thus, whenever there is genuine righteousness by faith, righteousness becomes manifested by good works. For “Faith without works is dead” (James 2:14–24).

Truthfully, Paul’s message was not new for John the Baptist preached a similar message saying, “Therefore bear fruits worthy of repentance” (Matthew 3:8). The fruit that accompanies salvation reveals the inward genuine experience (John 7:20; 12:33). Thus, the test of being born again is a transformation in the life. And the evidence of the sincerity of sinners who came to John’s baptism was revealed by their changed mind and character (John 3:2). Mere confession is worthless.

God waits patiently that His image may be reflected in the lives of His children (Luke 13:6–9). The fruits that “meet for repentance,” and correspond with the profession of repentance, is the fruit of the Spirit (Galatians 5:22, 23; 2 Peter 1:5–7). And without abiding in “the vine” there can be no real fruit (John 15:4, 5).

This answer is also available in: हिन्दीThe Bible does not mention the exact era of Job’s life but there are several clues that reveal the time in which he lived:…
View Answer 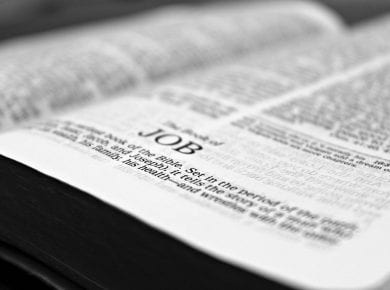 This answer is also available in: हिन्दीWe read the term perfect used in the first verse in the book of Job: “There was a man in the land of Uz,…
View Answer