The story of the lying spirit is found in 1 Kings 22. Some wonder: did God actually sent the lying Spirit to Ahab? This question is answered when we look at context of this story.

Ahab was a wicked idolatrous king who led his people away from God. So, the Lord sentenced that the house of Ahab would be destroyed (1 Kings 20:42, 21:19). After three years of war with Syria, Jehoshaphat, king of Judah, came to visit Ahab. King Ahab  convinced Jehoshaphat to join him and attack Ramoth-Gilead and take it from the Syrians. Jehoshaphat, being a godly man wanted to seek God’s will in the matter. So, Ahab summoned his 400 false prophets and asked them to prophecy. All the prophets of Baal confirmed that God would give the king victory in the battle. They prophesied, “Go up, for the Lord will deliver it into the hand of the king” (1 Kings 22:6).

Jehoshaphat insisted on seeing a prophet of God

But Jehoshaphat knew that these were not God’s true prophets and he insisted on seeking counsel from a prophet of God. Ahab told him that he knew of such a prophet by the name of Micaiah but that he hated him because he never prophesied good about him (1 Kings 22:8). Nevertheless, Micaiah was summoned and he warned the two king to not go to battle with Syria because they would be defeated. Ahab got angry and said, “Didn’t I tell you that he never prophesies anything good about me, but only bad?” (1 Kings 22:18).

The prophecy of Micaiah

And, the prophet Micaiah added, “I saw the LORD sitting on His throne, and all the host of heaven standing by, on His right hand and on His left. And the LORD said, ‘Who will persuade Ahab to go up, that he may fall at Ramoth Gilead?’ So one spoke in this manner, and another spoke in that manner. Then a spirit came forward and stood before the LORD, and said, ‘I will persuade him.’ The LORD said to him, ‘In what way?’ So he said, ‘I will go out and be a lying spirit in the mouth of all his prophets.’ And the LORD said, ‘You shall persuade him, and also prevail. Go out and do so.’ Therefore look! The LORD has put a lying spirit in the mouth of all these prophets of yours, and the LORD has declared disaster against you” (1 Kings 20:19-23).

In the above passage we see that Ahab had chosen to be led by false prophets, and God simply allowed him to be guided by these false prophets to his own destruction. Sin hardened the heart of Ahab and he became blind. The apostle Paul wrote, “the god of this age has blinded the minds of them who believe not” (2 Corinthians 4:4). Satan works to darken men’s minds and deceive their hearts (1 Timothy 4:2). These deadly sins are also called “grieving away” the Holy Spirit (Ephesians 4:30). Free will allows people to make choices to their detriment despite God’s warnings. Yet, unfortunately God is frequently blamed for doing that which He does not stop.

The death of Ahab

The two kings went to battle against the Syrians and didn’t heed the prophetic warning of Micaiah. Even though King Ahab disguised himself in the battle (v. 29), he still was hit by a man who drew a bow at random and struck the king between the joints of his armor. And the king was wounded and his blood filled the chariot and then died according to God’s warning (v. 35-39). 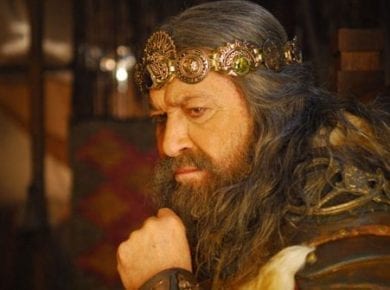 Saul disobeys God eventually. The early reign of King Saul was a critical time in Israel as they were neck-to-neck in battle with their all-time enemies. Samuel gave specific instructions…
View Answer

The story of the lie of Rahab is found in Joshua 2. Rahab a harlot in Jericho received and concealed the two Israelite spies. And when the king of Jericho asked Rahab for the spies’…
View Answer