Some claim that according to Philippians 2:6,7, Christ “emptied Himself” of deity when He was born on earth. Paul wrote that Jesus, “emptied Himself, taking the form of a bond-servant, and being made in the likeness of men” (NASB).

But what did Paul mean by the phrase, “emptied himself”?

The NIV translation seems to have captured the real meaning by stating that Christ “made himself nothing.” The Greek word kenόō literally means “to empty; to make empty; or to make vain or void.” Thus, this word means “made void.” The prophet Isaiah gave the same meaning: “He poured out his soul unto death” (Isaiah 53:12).

And Paul explains the emptying of Christ in the next phrase: “Taking the form of a servant and coming in the likeness of men’” (Nelson’s Illustrated Bible Dictionary). Unlike Adam and Eve, who made an attempt to seize equality with God (Genesis 3:5), Jesus, the last Adam (1 Corinthians 15:45), humbled Himself and obediently accepted the role of a servant.

Obedient to the Father

As a slave’s main characteristic is giving unquestioning obedience to his master, so as a man, Jesus was obedient to the Father (Hebrews 5:8). Service became the order of Jesus’ life (Matthew 20:28). The life of Christ thus became the simple outworking of the will of God. His whole life was subordinated to the will of the Father, as our lives should be.

Both God and man

About Jesus’ humanity, Paul confirmed, “In all things it behoved him to be made like unto his brethren” (Hebrews 2:17). He was a complete man, yet He was also divine. Our belief in the deity of Christ must not weaken in any way our belief in His complete manhood. If Christ was not absolutely a man, if His divinity in the least degree qualified His humanity, then He practically ceases to be an example, and, indeed, a substitute.

The scriptures also teach that while Jesus was on Earth, He was equal with God the Father (John 10:28) and allowed others to call him “God” (John 20:30; Matthew 16:16). He also accepted worship, even though He plainly taught that only God is worthy of worship (Matthew 8:2; 4:10).

Philippians 2:7 does not teach that Christ emptied himself of His deity. Rather, that He added humanity to His divinity. For He was subject to such things as hunger, thirst, pain, disease, and temptation (John 19:28; Hebrews 4:15). In short, He was both God and man.

This page is also available in: العربية (Arabic) Français (French) हिन्दी (Hindi)After the Resurrection, Jesus’ body was real, with flesh and bones that you could touch and feel. “Behold My…
View Answer 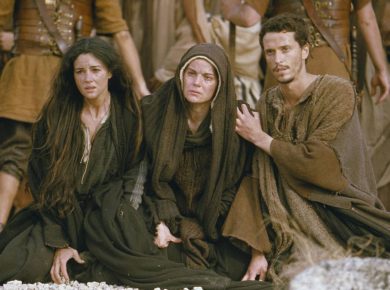