Capital punishment was certainly taught in the New Testament. Consider, for example, Romans 13:1-4. “Let every soul be subject to the governing authorities. For there is no authority except from God, and the authorities that exist are appointed by God. Therefore whoever resists the authority resists the ordinance of God, and those who resist will bring judgment on themselves. For rulers are not a terror to good works, but to evil. Do you want to be unafraid of the authority? Do what is good, and you will have praise from the same. For he is God’s minister to you for good. But if you do evil, be afraid; for he does not bear the sword in vain; for he is God’s minister, an avenger to execute wrath on him who practices evil.”

These verses clearly teach that the state—civil government—has the God-ordained responsibility to enforce law and order, and to protect its citizens against evildoers. The word “sword” in this passage refers to capital punishment. God delegates duly constituted civil authority to execute the death penalty upon citizens who commit crimes worthy of death.

In modern societies which fail to administer capital punishment by being more lenient to criminals, we find a great deal of chaos and disorder. The prison system is over run with persistent criminals that are not punished. As a result, premature parole and early release becomes the norm to accommodate for the ever growing number of criminals.

The New Testament teaches the necessity of administering punishment for offenders. Paul said, “If I am an offender, or have committed anything worthy of death, I do not object to dying” (Acts 25:11). Paul saw that the state had the right to execute judgement upon the offenders and in some cases even the death penalty on those that deserve it (Titus 3:1). Also, Peter taught the same truths when he stressed, “the punishment of evildoers” (1 Peter 2:14).

Finally, Jesus in the parable of the Pounds spoke of the administration of capital punishment against those who rebelled against the king. The wicked were brought and executed for their rebellion (Luke 19:27). This same truth is also presented in another parable of Jesus, in the wicked husbandmen in Luke 20:15-16, when the owner of the vineyard would return to destroy the murderous husbandmen.

Table of Contents Origin of SatanWhat happened in HeavenLucifer becomes SatanOutcome It’s true, Satan was once a glorious angel in Heaven. There are several Bible texts that explain to us…
View Answer 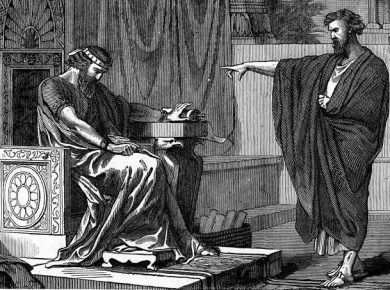