God can’t change the devil into a good angel. The reason for this lies in the freedom of choice that God has given to all His creatures. God could have created them so that they cannot sin. They would not be able to choose right or wrong because they would be “programmed” to only do right. Had the Lord done this, there would be no meaningful relationships between Him and His created beings. But instead, God created us with freedom of choice so that we could choose to trust Him and respond to His love or choose to disobey Him. Sadly, Lucifer chose to use his freedom to rebel against God and thus became known as the devil or Satan.

What made the devil rebel? The answer is pride. “Your heart was lifted up because of your beauty; you corrupted your wisdom for the sake of your splendor” (Ezekiel 28:17). Satan started to think too highly of himself because of all his God-given gifts, and he started to crave for himself the honor that was bestowed on God. Isaiah 14 is another chapter that we can draw clues from concerning this, in verses 13 and 14 it says about Lucifer, “For you have said in your heart: ‘I will ascend into heaven, I will exalt my throne above the stars of God; I will also sit on the mount of the congregation on the farthest sides of the north; I will ascend above the heights of the clouds, I will be like the Most High.’”

Lucifer wanted the honor that should only go to the Creator. He wanted it so badly that he was even willing to fight against God for it. Revelation 12:7-9 reveals the fact that there was an actual war in heaven “… Michael and his angels fought with the dragon; and the dragon and his angels fought, but they did not prevail, nor was a place found for them in heaven any longer. So, the great dragon was cast out, that serpent of old, called the Devil and Satan, who deceives the whole world; he was cast to the earth, and his angels were cast out with him.” This is why God can not simply change Satan to become good.

This page is also available in: हिन्दी (Hindi)While God created both angels and human beings, there are quite a few differences. Here are some comparisons listed below: Angels are spiritual…
View Answer 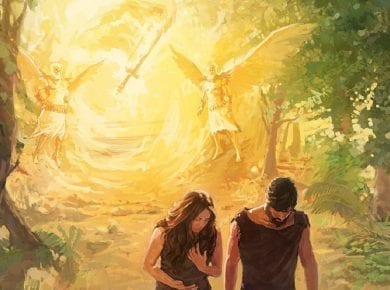 This page is also available in: हिन्दी (Hindi)  “Then the Lord God said, “Behold, the man has become like one of Us, to know good and evil. And now, lest…
View Answer