It is essential that people learn to think for themselves and not have blind faith in what is being taught in the science fields. The following are few reasons why evolution is inaccurate:

The fact that matter exists in outrageously large quantities simply proves evolution is wrong. The “Big Bang Theory” doesn’t address this problem. Something cannot evolve from nothing.

The smallest living cell has the complexity of a Boeing 747 jumbo jet airplane. The components of the smallest living cell prove without a doubt an intelligent design, just as the Boeing 747 did not come by accident in a junk yard. The minimal cell contains more than 60,000 proteins of 100 different configurations. The smallest single-cell creature has millions of atoms forming millions of molecules that must each be arranged in an exact pattern to do the required functions. This is too complex to happen by accident or chance.

3-The Second Law of Thermodynamics

Darwin’s theory teaches that evolution was possible through natural selection. This idea states that the members of a species that are stronger, larger, or faster will live longer to produce offspring with these higher adaptations (links or intermediates). This contradicts the theory of natural selection, which teaches that birds adapt and change in order to better survive in their environment.

5-Species Without A Link

The lack of transitional links has proven the theory of evolution inaccurate. If evolution were true, all life forms would be a continual blend of characteristics without a clear definition among the species. No two creatures would be identical, because they would not be separate species.

Where are the inferior branches of the evolutionary process in the different life forms? They don’t exist, but they should if the Theory of Evolution was true. There is absolutely no evidence in the fossil record to their existence.

The female eggs develop within the ovaries while she is a baby in her mother’s womb. Evolutionists say environmental aspects make small changes in the offspring in the evolutionary chain. However, the environmental life of the female cannot alter the chromosomes within her eggs. Therefore, Females cannot be a part of the evolutionary theory. As for the male sperm, they are formed in the testes of a male daily. This short period between the creation of the sperm and conception within the female make it impossible that the male can be a part of the evolutionary process.

The scientific fact that DNA replication, including a built-in error checking method and a DNA repair process, proves the evolutionary theory is wrong. The fact is, any attempt by the DNA to change is stopped and reversed.

There is no scientific proof that a species can change the number of chromosomes within the DNA. The chromosome count within each species is fixed. This is the reason a male from one species cannot mate successfully with a female of another species. Therefore, man could not evolve from a monkey.

Humanity has left behind archaeological spots all over the planet. These constructions were done by man and date back to less than 10,000 years. Yet we cannot find any human encampments dating back 20,000 years. There is none.

The theory of evolution is inaccurate and the irony is that Darwin himself never claimed that it was. He went to his deathbed objecting that he’d been misunderstood. 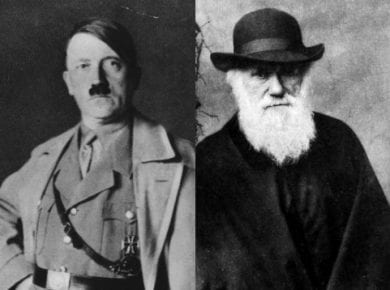 Darwin based the theory of evolution on the concept that all humans evolved from ape-like creatures, and, since some groups of humans supposedly are less ape-like than others, some humans…
View Answer

The probability of life happening by chance is impossible! One chemist has calculated the immense odds against amino acids ever combining to form the necessary proteins by undirected means. He estimated…
View Answer