In the Bible, oil is a symbol for the Holy Spirit (Matthew 25:1-13). Anointing with oil was used in the Old Testament for pouring on the head of the high priest and sprinkling the tabernacle and its furnishings to set it apart to the Lord (Exodus 25:6; Leviticus 8:30; Numbers 4:16). It was called “holy, anointing oil,” and none of it was to be used by anyone as a common ointment. It was to be reserved exclusively for sacred use (Exodus 30:32-33).

And in the New Testament, anointing was an important ministry of the church. The purpose of this anointment was for both the physical and the spiritual healing of the soul. Mark 6:13 states, “And they cast out many devils, and anointed with oil many that were sick, and healed them.” And in Mark 14:3-9, Mary anoints Jesus’ feet as an act of gratitude and worship.

The apostle James instructs, “Is anyone among you sick? Let him call for the elders of the church, and let them pray over him, anointing him with oil in the name of the Lord.  And the prayer of faith will save the one who is sick, and the Lord will raise him up. And if he has committed sins, he will be forgiven” (James 5:14-15).

Notice in the passage of James 5 that those who anoint others are the “elders” in the church and not the common members in the congregation.  The elders were not the apostles, for elders are mentioned separately from apostles in Acts 15:2, 4, 6. The term elder is used for officers who held the primary responsibilities in their local congregations. In the early church, the elder was also known as an episkopos, meaning “overseer,” a word that has come into English as “bishop.” The evidence of the NT indicates clearly that in apostolic times the two terms referred to the same official (1 Tim. 3:2–7 with Titus 1:5–9; Acts 20:28; Phil. 1:1).

Simon Peter, the apostle of Jesus, was characterized by a courageous and also impulsive nature. These characteristics were especially demonstrated in the following instances: 1-Being a natural-born leader, Peter became…
View Answer 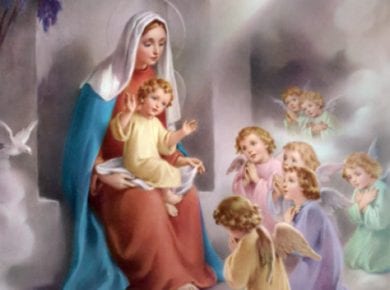 The Hail Mary, Ave Maria in Latin, is a Roman Catholic prayer to the Virgin Mary that contains salutations and request for intercession. The text Hail Mary comes from two…
View Answer