Sarai (Sarah) was the wife of Abram (Genesis 16:1). They both had the same father but different mothers (Genesis 20:12). This was accepted at that time. Sarai and Abram lived originally in Ur, in the land of the Chaldees and worshiped the living God (Genesis 12:1–4; 15:6). The Lord commanded Abram to leave Ur to a land that He would should him. As they traveled they faced a famine, so they went to Egypt (Genesis 12:10). Abram was afraid that the Egyptians would kill him and take Sarai because she was very beautiful. So he asked her to say that she was his sister (a half-truth). Pharaoh found about Sarai and took her to his house. But God intervened and plagued Pharaoh’s house and he returned her to Abram (Genesis 12).

Sarai and Abram reached the land that God led them to. And there, God promised Abram a son and that his descendants would be as the stars of heaven (Genesis 15) and inherit Canaan. But Sarai was barren. When ten years passed and still there was no child, Sarai asked Abram to have a child with her servant Hagar. Abraham did as she suggested and Hagar conceived and gave birth to a son called Ishmael. After bearing a child, Hagar looked down at Sarai, and Sarai treated her harshly, so Hagar ran away. But the Lord asked Hagar to return and be subject to Sarai (Genesis 16).

Thirteen years later, God told Abram that He would give him a son through Sarai. This son—Isaac— not Ismael would be the son of His covenant. The Lord changed Abram’s name to Abraham, meaning “father of a multitude” and He changed Sarai’s name to Sarah, meaning “mother of nations.” God fulfilled His promise to Abraham and Sarah gave birth to Isaac (Genesis 21:1).

When Isaac was weaned, Abraham held a feast. But Ishmael, Hagar’s son, was mocking Isaac. So, Sarah told Abraham that He needed to send Hagar and Ishmael away. Abraham didn’t want that, but God told him to do what Sarah said. Abraham sent Hagar and Ishmael away (Genesis 21:8–21) remembering God’s promise of blessing Ishmael and making a great nationi (Genesis 17:20).

Sarah believed in the living God and in His unchanging Word. Even though she was 90 and Abraham was 100, she trusted that the Lord will fulfill His promise by giving them a son in their old age. She died at the age of 127 (Genesis 23:1). During her life Sarah respected Abraham and submitted to his headship in the home (Genesis 18:12). The apostle Peter points to her as the matriarch of all godly wives (1 Peter 3:5–6). 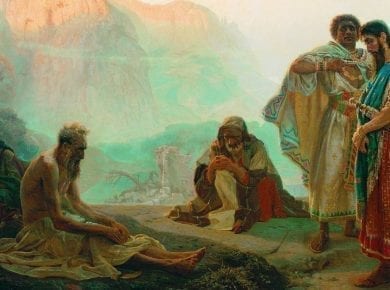 This answer is also available in: हिन्दीThe story of Job reveals what goes on behind the scenes in a believer’s life.  The book tells how Satan, appeared in heaven (ch.… 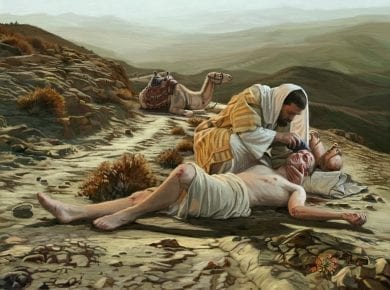 This answer is also available in: हिन्दीThe Parable of the Good Samaritan can be found in the Gospel of Luke: “And Jesus answering said, A certain man went down from…