While there are sincere godly faith healers, there are also false ones. So, how can we differentiate between the true and the false healers?

Differences between the true and false healers:

1-Jesus Christ healed everyone that came to Him without exception. “Then His fame went throughout all Syria; and they brought to Him all sick people who were afflicted with various diseases and torments, and those who were demon-possessed, epileptics, and paralytics; and He healed them” (Matthew 4:24 also Luke 4:40). By contrast, some modern faith healers pick who they will heal, not everyone is entitled for healing in their crusades.

2-Jesus offered people complete healing. For example, the blind beggars in Matthew 20:34 received full sight. And Jesus completely healed Peter’s mother-in-law and she got up and served Jesus and His disciples (Mark 1:31). By contrast, some modern faith healers offer partial healings to people.

3-Jesus healed people instantly. For example, He healed the centurion’s servant instantly (Matthew 8:13). And the paralytic got up instantly and started to walk (Luke 5:24-25). By contrast, some of the modern day faith healers claim that their healing may be experienced  gradually.

4-Jesus performed miracles for many obvious diseases like blindness, deafness, paralysis, leprosy…etc. By contrast, some modern faith healers heal symptoms like back-pains, headaches, breathing complication…etc. where such healing can’t be proved beyond what one individual says.

6-Jesus did not ask for money in return for healing. In fact, Jesus instructed His disciples, “Heal the sick, raise the dead, cleanse those who have leprosy, drive out demons. Freely you have received; freely give” (Matthew 10:8). By contrast, some modern faith healers stress the giving of resources to obtain healing.

7-Jesus was a perfect, humble man (Luke 9:58). By contrast, some modern faith healers live lavish and luxurious life styles which are contrary to the spirit of self-sacrificing service that Jesus and His followers manifested.

Therefore, we can conclude that these faith healers that are portrayed by the above criteria are not from God.

The test of faith

Jesus said, “Not everyone who says to Me, ‘Lord, Lord,’ shall enter the kingdom of heaven, but he who does the will of My Father in heaven. Many will say to Me in that day, ‘Lord, Lord, have we not prophesied in Your name, cast out demons in Your name, and done many wonders in Your name?’  And then I will declare to them, ‘I never knew you; depart from Me, you who practice lawlessness!’” (Matthew 7:21-23).

Miracles don’t mean that the doer is always in line with God’s will. Satan will perform miracles through his children (Revelation 16:14; Revelation 13:13, 14). “For there shall arise false Christs, and false prophets, and shall shew great signs and wonders; insomuch that, if it were possible, they shall deceive the very elect” (Matthew 24:24). In fact, Satan and his angels will appear as angels of light (2 Corinthians 11:14) and, even more shocking, as Christ Himself (Matthew 24:23, 24).

Those who claim to be godly are to be tested by their lives (Matthew 7:16), and not by their preaching, performing miracles, or doing supernatural acts. A true Christian will do God’s will and obey His commandments (John 14:15). 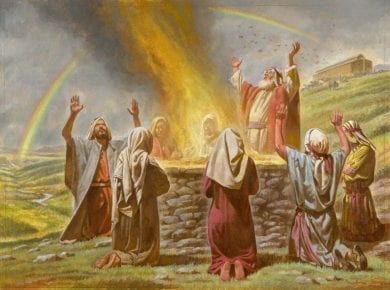 This answer is also available in: العربية हिन्दीA burnt offering was the slaying of an animal to draw closer to God. The word offering is from the Hebrew word “qorban”…
View Answer

This answer is also available in: العربية हिन्दीGethsemane is a name of a garden in Palestine that was often visited by Jesus. The exact location of the garden of Gethsemane…
View Answer