Angels are a different order of beings than humans. They are spirits and not physical beings (Hebrews 1:14) whereas humans are souls that possess physical bodies (Genesis 2:7). The Bible doesn’t tell us that angels were created on God’s image like humans (Genesis 1:26-27).

But these spiritual beings can take on physical forms. In Genesis 18, Abraham was visited by three heavenly messengers who appeared like men. Also, the two angels that appeared to Lot looked like passing visitors to the city of Sodom (Genesis 19).

Angels are not naturally visible to humans. When Elisha prayed that his servant would see God’s messengers, the young man’s eyes were opened and he was able to see an army of invisible angels surrounding the city (2 Kings 6:17).

These heavenly spirits usually appear as males (Mark 16:5). Unlike popular belief, these beings in the Bible never appear as infants. Some believe that they all have wings, however, the Bible mentions only two types of angels that have wings: Cherubim (Exodus 25:20; Ezekiel 10) and Seraphim (Isaiah 6). The living creatures seen by Ezekiel are represented as having four wings (Eze. 1:6) with two wings covering the body and two wings stretched upward (Eze. 1:11). And Isaiah saw them with six wings: two wings covering the face, in an attitude of homage and reverence before God, two wings covering the feet, and two used for flight.

These heavenly beings have the “appearance of lightning” as the one seen in Daniel’s vision (Daniel 10:5-6) and also the one that rolled back the stone from Christ’s tomb (Matthew 28:3; Luke 24:4). 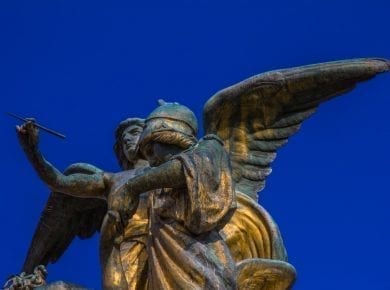 This answer is also available in: हिन्दीSome believe that all angels have wings, however, the Bible mentions only two types of angels that have wings: Cherubim (Exodus 25:20; Ezekiel 10)…
View Answer

This answer is also available in: हिन्दीThe devil will perform great miracles The devil will be able to deceive the whole world through his miracles and supernatural powers. Jesus warned…
View Answer