“Let every soul be subject unto the higher powers. For there is no power but of God: the powers that be are ordained of God.”

The verse should be read in the context given. If you continue to read the chapter, it states in verse 4, “For rulers are not a terror to good works, but to the evil. Wilt thou then not be afraid of the power? do that which is good, and thou shalt have praise of the same:” This is speaking of a just government, not a genocidal tyranny like that of Hitler. The context of the the whole chapter of Romans 13 is basically saying that God’s people should be good citizens in their community.

In the case of the governments of Hitler and Stalin, they were setting up governments that clearly were not just or fair. Their short lived tyrannies were not what this verse is talking about. God did, however, allow their governments to last for a short time, as this was a fulfillment of prophecy in Daniel 2 of a divided Europe that would never be united (verses 40-42). Whenever a government seeks to break the laws of God, although we should be good citizens, we cannot stand for injustice. We see an example of this in Daniel 3 when the three Hebrews were threatened with death if they would not bow down to the government made idol (16-19). They chose to honor God above any earthly government and God blessed their efforts (Daniel 3:24-25).

So would it be the case for Christians that while they are to be good and upright citizens, they would choose to obey God rather than man (Acts 5:29). That would be to obey God’s laws over any law that contradicted it. An example of this is Daniel 6 where he breaks the law that says he cannot pray to the true God (Daniel 6:10). He faces the lion’s den because of it, but again God uses this for His glory (vs 22).

While God is love and never intended for evil to occur, it is allowed as part of our freedom of choice. We also have a choice in how we respond to the evil around us. While the actions of Hitler’s government were terrible and brought about much pain, suffering and death, it was in this hardship that one of God’s people shone the brightest. Consider reading the book, “The Hiding Place” by Corrie Ten Boom. She is a living illustration of what true Christianity is in the face of adversity. She demonstrated the love and forgiveness of Christ to the Nazi generals who tortured her and murdered her family members.  While evil is allowed for a short time, God uses our experiences to mold us into His image of love (Zechariah 13:9).

“Let us walk honestly, as in the day; not in rioting and drunkenness, not in chambering and wantonness, not in strife and envying. But put ye on the Lord Jesus Christ…” (Romans 13:13-14). 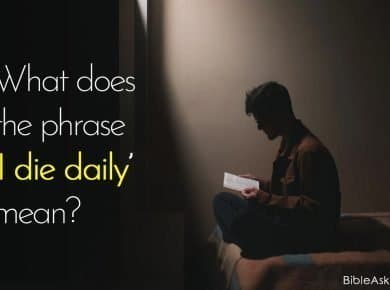 I die daily The apostle Paul in his first epistle to the Corinthian Church wrote the famous phrase: “I die daily” (1 Corinthians 15:31). In this passage, Paul was showing…
View Answer